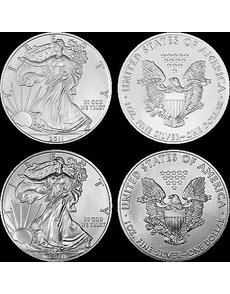 U.S. Mint officials are disputing assertions made at online numismatic message boards that certain coins in the 2011 American Eagle 25th Anniversary Silver Coin set may have been struck on the wrong blanks with the wrong finish.

U.S. Mint spokesman Michael White issued a statement Nov. 30 noting that Mint officials “are not aware of any bullion coins in the 25th Anniversary Sets being struck on burnished blanks used for the uncirculated coins in the set.”

“The blanks for the bullion strikes are used straight from the vendor while the blanks for the uncirculated coin are cleaned and burnished,” White said. “There may be similarities in the brightness range for the two products but greater variations in appearances are due to die-to-die hand finishing variation or how many strikes are on the die.”

The 100,000 five-coin sets went on sale at noon Eastern Time Oct. 27 and sold out in less than five hours. The sets were shipped from the Mint’s contracted order fulfillment center outside Indianapolis beginning Nov. 8 to customers who successfully ordered them. The sets began showing up in collectors’ hands the following day.

The Mint imposed a five-sets-per-household ordering limit. With more than 20,000 orders successfully placed for the 100,000 sets, the average per order was 3.7 sets.

? One Uncirculated 2011-S coin struck at the San Francisco Mint.

? One Uncirculated 2011-W coin struck at the West Point Mint.

? One Reverse Proof 2011-P coin struck at the Philadelphia Mint.

? One 2011 bullion coin, confirmed by the U.S. Mint as having been struck at the San Francisco Mint, without an S Mint mark.

Some individuals commenting in online discussions, including postings illustrated with photos of coins found in some of the 25th Anniversary sets, speculated on whether some of the bullion coins in the sets may have been struck on burnished planchets intended for the Uncirculated coins in the set. Speculation arose because of the unusual brilliance of some of bullion coins when compared against bullion strikes sold by the U.S. Mint through its authorized purchasers.

Online discussion also included speculation that some of the Uncirculated 2011-W coins in the Anniversary sets may have been struck on planchets intended for the bullion coins in the set.

From 2001 up until May 2011, all American Eagle silver bullion coin production was conducted at the West Point Mint. In the spring of 2011, the San Francisco Mint began augmenting West Point output to help the U.S. Mint meet investor demand for the coin. The San Francisco Mint has been responsible for 20 to 25 percent of the monthly silver bullion coin production since coining began there.

When the U.S. Mint first announced Aug. 19 that a 25th Anniversary set was going to be produced, officials indicated the bullion coin in the set might be from a supply of mixed West Point Mint and San Francisco Mint strikes, since the resulting coin would bear the same finish regardless of which facility struck the coin and since no Mint mark identifies the source of the bullion issues.

The planchets for the bullion, Uncirculated, Proof and Reverse Proof coins are exactly the same when received from the U.S. Mint’s three silver blank vendors, with the bullion coins receiving no special treatment before striking.

The blanks for the Uncirculated version are cleaned and burnished before striking. For the Proofs, not only are the blanks highly polished, but designated areas of the dies are also highly polished, with the remaining devices frosted for contrast. ¦