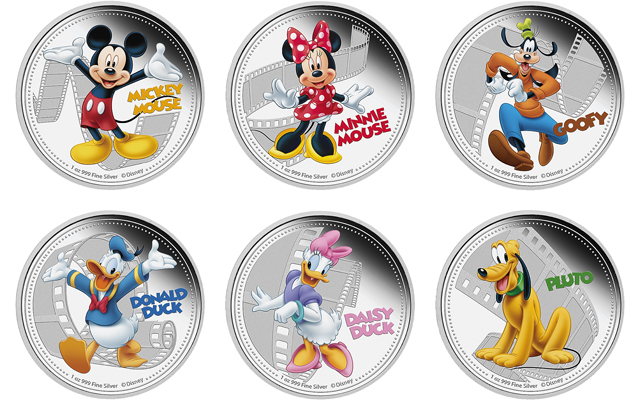 Mickey Mouse and five friends feature on new Proof .999 fine silver $2 coins issued in the name of Niue through the New Zealand Mint and the Perth Mint.

Image courtesy of the Perth Mint and the New Zealand Mint.

Mickey Mouse and five of his friends are now available in a series of 2014 collector coins for Niue.

The New Zealand Mint and the Perth Mint have cooperated with Disney to issue the licensed coin series, which began in April with the release of a Steamboat Willie design. The series continued in June by celebrating the anniversary of Donald Duck. Both coins sold out their 10,000 mintage limit quickly.

Now, the modern designs of Mickey and Minnie Mouse, Donald and Daisy Duck, Pluto and Goofy are being celebrated with coins. Each character appears in color on the reverse of the new coins.

The “Mickey and Friends” series are the first colorful Disney coins in the series, as earlier issues were not colorized.

The obverse of each coin shows the Raphael Maklouf effigy of Queen Elizabeth II.

Each is individually packaged in a display case which sits inside a film-reel-themed box.

Quarter-ounce gold versions of the six Mickey and Friends coins will go on sale Sept. 22.