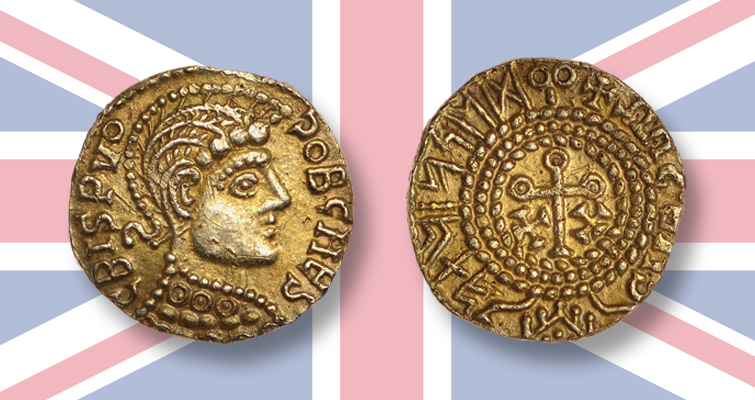 The ninth known example of rare medieval gold shilling or thrymsa, found by a metal detector in January, was sold at auction in London.

A tiny gold coin from medieval England, one of nine examples known, starred in Dix Noonan Webb’s March 8 and 9 auction in London.

The circa A.D. 650 to 750 gold thrymsa, also known as a shilling, is graded Extremely Fine and is centrally struck with all the inscriptions visible, according to the auction house.

It was bought in the saleroom by a dealer for a client, according to the auction house.

The coin was discovered in Haslingfield in South Cambridgeshire on Jan. 3, 2022, by a 55-year-old drainage engineer, Mark Pallett from Brentwood in Essex, using a metal detector. Pallett found the coin in a stubble field that he had been to many times before, with his Minelab Equinox 800.

The coin is in addition to eight examples of this “Crispus” type to have been recorded on the Early Medieval Coins database at the Fitzwilliam Museum in Cambridge, the auction firm said.

Following the sale, father-of-three Mark, who has been detecting for almost 40 years, said: “I am truly overwhelmed by the price that the coin achieved and am pleased for myself and the farmer who will get half of the proceeds. I did think about buying a new detector with the money, but I don’t think that there’s anything wrong with my current one as it helped me find this wonderful coin!”

The coin measures 13 millimeters in diameter and weighs 1.3 grams, smaller and much lighter than a current Roosevelt dime.

During his 38 years of detecting, Pallett has concluded that his best finds always turn up in the first two weeks of January, and on this occasion he again knew he was about to find gold.

“It’s almost like a voice in your head that tells you where to search,” he said, through the auction house.

Pallett “has a sixth sense in finding gold coins and has even used divining rods to dowse for them with great success,” the firm said.

The finder of the coin originally thought it was a small button with a cross in the center.

After just 15 minutes of being on the field, he got a faint signal and dug down 4 inches, where the coin was buried.

“To start off with, he didn’t think that the coin was real, but upon turning it over he saw the image of a helmeted male bust and realised this was something very special,” according to the auction house. “He was shaking so much, he couldn’t believe what he had found, showed it to his friends and put it safely in his pocket.”

The British and Fitzwilliam Museums each have only single examples within their collections, while Metcalf’s corpus of the Ashmolean Museum collection lists no example present.

Owing to the broad flan used to strike this coin, the runic inscription is clearly readable from right to left. Researcher Marion Archibald proposed that “Delaiona” was a mint signature (of London); however, in the face of contradictory find-spot evidence it may be preferable to interpret this as a personal name, the firm said.

Nigel Mills, a consultant at Dix Noonan Webb said: “The design is based on an obsolete Roman coin of the emperor Crispus from the 4th century AD. The legend includes Runic text which translated into Latin is Delaiona (of Laiona) which may refer to the moneyer who struck the coin.”

Mills continued: “Early Anglo Saxon Runes or Futhark [name derived from transliterating the first six runes in the sequential list of 24 in an early Runic “alphabet”] originate from Germanic peoples and were sometimes included alongside Latin text on coins in Britain during the 7th century. The most famous discovery of thrymsas was at Sutton Hoo in the ship burial when 37 were found in 1939. Also the Crondall hoard found in 1828 contained 100 gold coins.” 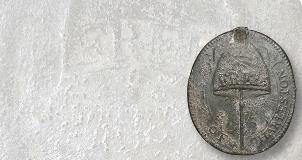 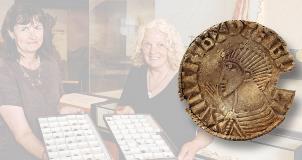 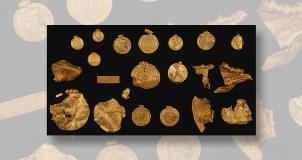