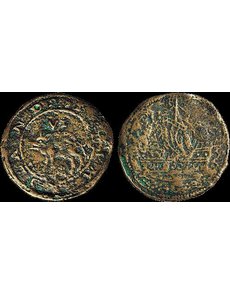 Large Porthole sixpence, Hogge money, retrieved from around King’s Castle, Castle Island, Bermuda, during a series of archaeological excavations from 1993 through 1996.

I enjoyed Paul Gilkes’ article on Hogge money in the Sept. 23 issue of Coin World. My metal detector is ready! There have to be more. Are there restrictions on searching for such antiquities in the United States as in Greece and other nations?

The laws involving metal detecting finds in the United States represent an interesting and at times complicated intersection of federal laws that affect all states and individual state laws.

A key question is who owns the land on which the metal detecting activity is taking place.

It is generally illegal to surface collect, metal detect or dig on federal lands without a federal permit. The laws effectively limiting metal detecting activities on federal property have been in place for more than a century, as the Antiquities Act of 1906 became law on June 8, 1906.

While the Antiquities Act is not a metal detecting law in its language, it effectively limits metal detecting activities on federal lands. In 1966 the National Historic Preservation Act and The Archaeological Resources Protection Act of 1979 further placed boundaries on metal detecting enthusiasts.

A helpful online resource is a map by the Metal Detecting Hobby Talk site at www.mdhtalk.org/maps/fp-map-regulations.htm that provides state-by-state regulations.

Metal detector enthusiasts also note that actual practices in a region may deviate from the regulations legally in place.