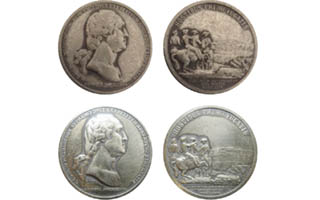 While metal detecting, collector Larry Towle discovered a pewter example, top, of the 1976 reproduction of the original Washington Before Boston medal. Images at bottom show a higher quality version of the medal recently offered on eBay.

Images courtesy of Larry Towle and 1dwinter on eBay.

I found this medal with a metal detector. Any information would help. Thanks.

The images the reader provided of the 38-millimeter pewter medal show a U.S. Mint-struck reproduction from the 1970s of the original George Washington Before Boston 1776 medal.

The original George Washington Before Boston 1776 medal was part of the Comitia Americana series of medals, authorized by Congress to commemorate significant American victories during the Revolutionary War and honor the military officers who achieved them.

The original gold George Washington Before Boston 1776 medal, 65 millimeters in diameter and presented to Washington in 1790, is housed at the Boston Public Library.

Duplicates, also in 65-millimeter diameter, have been struck over the years at the Paris Mint in silver and bronze versions for sale to collectors.

Additional restrikes with newly made, modified dies, are known to have been made at the Philadelphia Mint long after the original was produced in Paris.

The designs for the original medal were executed by engraver Pierre Simon DuVivier.

The obverse is based on a bust of Washington by French sculptor Jean-Antoine Houdon. The reverse depicts Washington on horseback pointing toward the retreating British fleet while the Continental Army readies to retake the city of Boston on March 17, 1776.

According to medallic art specialist David T. Alexander, who pens the monthly Coin World column “The Research Desk,” reader Towle’s medal is from the series of reduced-size Bicentennial re-creations of the Comitia Americana medals created by the U.S. Mint and Smithsonian Institution in 1976. The reproduction medals were sold individually and in sets with an album and book by Elvira Clain-Stefanelli, one of the curators for the National Numismatic Collection in the Smithsonian’s National Museum of American History.

The same medals in bronze, in much larger size, were once part of the U.S. Mint’s medal offerings. Dropped in 2009, they are slated for possible resurrection as the U.S. Mint reconsiders its medallic offerings.

Alexander said the pewter reproductions of the medals “were made to ‘look old’ by deliberate crudity of strike and scudzy patina. The sets with albums are hard to sell at any price today, perhaps $10 to $20; individual medals are $1 or less.”