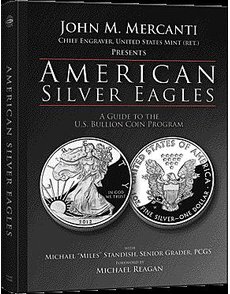 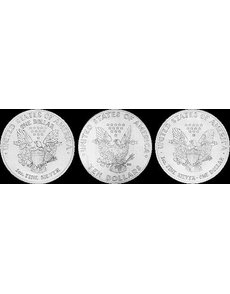 The sketch at the right most closely resembles the final reverse design as it appeared on the silver American Eagle beginning in 1986. At center is another one of Mercanti’s design submissions with the eagle slightly turned and the design bearing a $10 denomination. Mercanti’s sketch at the left is similar to the adopted design, only with legends in different positions. 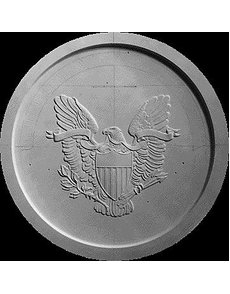 Shown is the final model for the American Eagle silver bullion coin’s reverse central design as it appeared beginning in 1986. 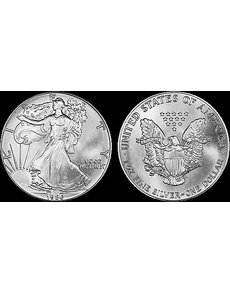 The American Eagle 1-ounce silver bullion coin made its market debut in November 1986. 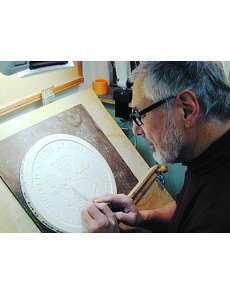 John Mercanti is shown in this 1993 photo at his easel in the engraving department at the Philadelphia Mint providing touch-ups to a plaster model of the American Eagle silver bullion coin. 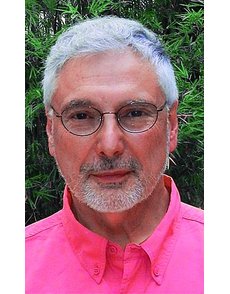 Possibly everything you ever wanted to know about the silver American Eagle — one of the most widely collected modern U.S. coins — is now packaged in a single reference co-authored by the U.S. Mint sculptor-engraver who designed and sculptured the coin’s reverse.

To be officially released Nov. 20 by Whitman Publishing LLC, American Silver Eagles — A Guide to the U.S. Bullion Coin Program, represents the culmination of a 36-year career by John M. Mercanti as a member of the U.S. Mint’s engraving staff at the Philadelphia Mint.

The book was written by Mercanti, with Michael “Miles” Standish, senior grader at Professional Coin Grading Service. The foreword in the 8.5-inch by 11-inch, 168-page hardcover book is by Michael Reagan, son of President Ronald Reagan, under whose presidential administration the American Eagle silver bullion coin was first introduced to collectors and investors in November 1986.

President Reagan signed the enabling legislation into law in July 1985.

Mercanti and Standish are scheduled to be attending the Whitman Baltimore Expo, Nov. 15 to 18, to help promote the book.

The two writers, according to Whitman, “bring together diverse elements — technical and artistic, historical and current, market-driven and hobbyist — to make American Silver Eagles a valuable addition to any numismatic bookshelf.”

Mercanti told Coin World that he considers the reference a “living book” that will require periodic updates as additional information becomes available.

A long career with the Mint

The American Eagle silver bullion coin was authorized July 9, 1985, under Title II of Public Law 99-61 — as The Liberty Coin Act. It was an amendment to the legislation authorizing the Statue of Liberty-Ellis Island commemorative coins.

The American Eagle silver bullion coin is codified in the United States Code as 31 U.S.C. § 5112(e)-(h).
Mercanti’s Heraldic Eagle design for the reverse of the American Eagle silver bullion coin was approved by Treasury Secretary James A. Baker III after review by the Commission of Fine Arts. The winning design was selected from submissions to an open design competition.

Mercanti retired from the U.S. Mint on Dec. 30, 2011, with the title of chief engraver. The title was bestowed upon Mercanti in February 2009 by then U.S. Mint Director Edmund C. Moy. The presidentially appointed position of chief engraver had been eliminated under Mint reform legislation in 1996, but Moy resurrected the title for Mercanti.

From 2006, with his naming as supervisory design and master tooling development specialist, up to and including his naming as chief engraver, Mercanti was responsible for supervising the Mint’s engraving staff, technicians, engineers and others.

During this period, Mercanti guided the output of the nation’s coinage from sketch to finished production, as well as any tweaking necessary in the steps between.

Mercanti’s tenure as a member of the U.S. Mint’s engraving staff is eclipsed only by Mint engravers George T. Morgan at 48 years, William Barber at 47 years, and Gasparro, Mercanti’s mentor, at 39 years.

Mercanti contributes behind-the-scenes history of the silver American Eagle, its design development, the minting process, and other elements of the coinage series.

Among the book’s contents are details about special American Eagle silver issues:

??Uncirculated 2008-W Reverse of 2007 coin — bearing a reverse of the 2007 style rather than the revised 2008 design. The difference is easiest seen at the U in UNITED, with the variant bearing the lettering style of 1986 to 2007, without a downstroke or stem (called a “spur or foot” in the book) at the right, while the style intended for 2008 as the Mint moved to digital sculpturing, and which appears on the Proof version, has a downstroke on the right side of the U.

??Reverse Proof 2012-S coin, special strike from the San Francisco Mint that was only available in the

An overview of other coins in the U.S. bullion program is also included.

The Mercanti/Standish reference also includes compiled charts for coin-by-coin comparisons; a glossary of numismatic terms; and an index for looking up specific information.

In American Silver Eagles — A Guide to the U.S. Bullion Coin Program, Mercanti, in his own words, chronicles his personal odyssey with the development and production of the silver coin since its introduction.

Mercanti relates that the silver American Eagle obverse was predetermined to replicate sculptor Adolph A. Weinman’s obverse design that had been adopted for the Walking Liberty half dollar (1916 to 1947). Mercanti says he has no idea who made that decision.

Mercanti explains that for the first few years of the silver American Eagle’s life, no modifications were made to Weinman’s obverse design despite fill problems with metal flow, a failing that resulted in a lack of fine details on the finished coins. Later, as technical changes were made in the creation of designs, models, hubs and dies, modifications were made to Weinman’s model. The Mint staff sharply enhanced the stars in the flag, the lines in Liberty’s skirt, Liberty’s sandals and the oak leaves, according to Mercanti, “so that everything was as clear as we could make it at that scale.”

In the book, Mercanti explains in detail the technical changes made to design processes during the production of the silver American Eagle, and how those changes ultimately permit desired design tweaks to be made.

The book can be pre-ordered for $29.95 per copy at www.whitman.com.

The book will also be available online and from bookstores and hobby retailers nationwide beginning Nov. 20. ¦