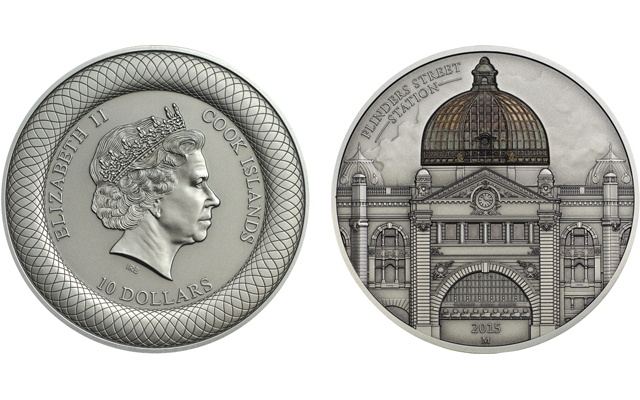 Melbourne’s picturesque railway station, the Flinders Street Station, is the subject of the latest coin from the Melbourne Mint. A copper insert on the coin replicates the copper roof of the station. 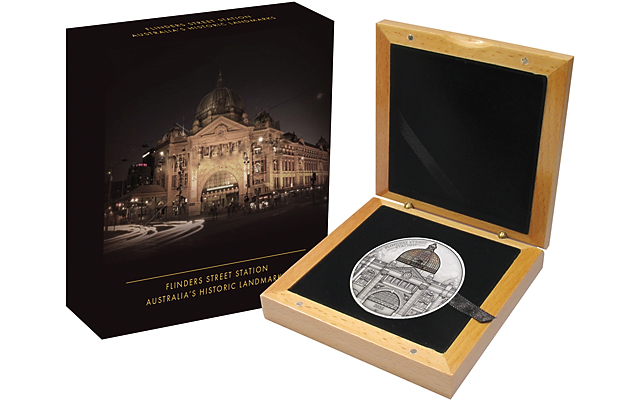 The Flinders Street Station two-ounce silver $10 coin minted in the name of the Cook Islands is presented in a wooden box with a colorful case.

A famous railway station in Melbourne is the subject of the latest coin from the Melbourne Mint.

The $10 from the private company honors the Flinders Street Station, a grand Edwardian building in the heart of the city of Melbourne. The station continues to serves as a transit center even today.

The 2-ounce high relief .999 fine silver coins struck in the name of the Cook Islands feature a colored copper insert replicating the ornate century-old copper dome of the building, whose construction began in 1905 and was completed in 1910.

The building is currently the subject of a $100 million Australian renovation project. It is perhaps the most famous, and probably the most popular, building in Melbourne, according to the Melbourne Mint, since the site draws more than 100,000 pedestrians through some part of the station each weekday.

The  50-millimeter-diameter coin has a mintage limit of 999 pieces.

Announced for sale May 20, the coins will become available for shipping in mid-July.

The Flinders Street Station 2-ounce silver $10 coin is presented in a wooden box with a colorful case, with an official issue price of $329 Australian, but American distributors (if any choose to carry the coin) will set their own prices.

To order the coin from its source, visit the Melbourne Mint website.