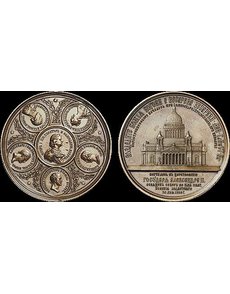 In 1858 after 40 years of construction, St. Isaac’s Cathedral opened as the largest church in Russia and one of the most lavish in the world. A bronze medal was commissioned to mark the milestone. 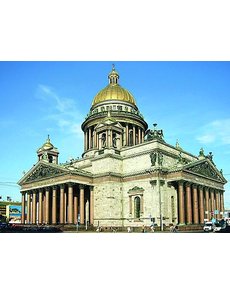 The dome on St. Isaac’s Cathedral was the third to be built with a cast-iron support.

Completion of St. Isaac’s Cathedral in Saint Petersburg in 1858 concluded four decades of construction and resulted in what was then the largest cathedral in Russia.

A bronze medal was issued to mark the consecration of the new center of worship in Romanov Russia. An Extremely Fine example of the medal is being offered at auction in New York City on Jan. 9 by The New York Sale, a consortium of A.H. Baldwin & Son, Dmitry Markov and M&M Numismatics.

Forty years is a long time, a near epoch in architectural terms. Overseeing the monumental construction project was French architect Auguste de Montferrand, who died just months after the cathedral was completed.

The church and its golden dome rise 101.5 meters (333 feet high) in the city skyline, dominating the view (though it no longer is the largest church in St. Petersburg). The dome was the third in the world to be constructed on a cast-iron support.

Inside, visitors will find 14 different colors of marble used in construction, along with gemstones like lapis lazuli, and frescoes, mosaics, stained glass and a gilded sculpture of Christ. Outside, the porticos hold pediments with sculptures, supported by massive red columns of granite weighing 80 tons each.

The current structure is the fourth church built on the site and dedicated to St. Isaac of Dalmatia, patron saint of Peter the Great. Peter ruled Russia when the first of four successive churches was constructed. That first building was destroyed by floods, the second by fire, and the third project was never completed as planned. In 1809 Czar Alexander I ordered construction of a new cathedral, and work on the fourth, current structure began in 1818.

During Soviet rule the church was converted into a museum. Today, it still serves as a museum but is a site of worship on certain ecclesiastical holidays.

The medal was designed by A. Lyalin and V. Alexeev. The obverse features a central medallion with a cameo portrait of Peter the Great, surrounded by portraits of Catherine the Great, Paul I, Alexander I, Nicholas I and Alexander II.

The 79-millimeter-diameter bronze medal is cataloged as Diakov 677.1 in Mikhail Diakov’s Medals of the Russian Empire, an eight-volume reference on the thousands of medals of Imperial Russia. The medal has an estimate of $500. ¦

Medal celebrates the lengthy effort to construct what was the largest church in Russia when it opened in 1858.