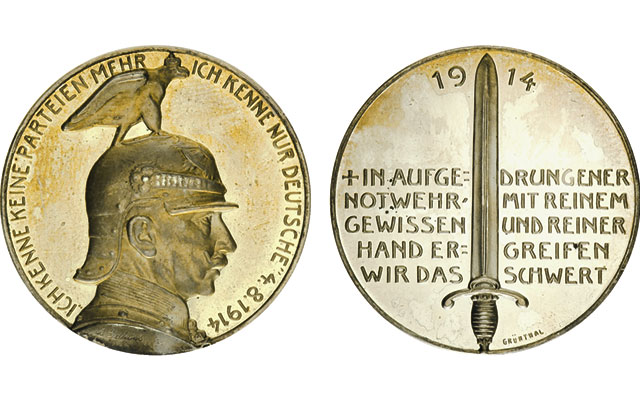 One hundred years after issue, this prooflike Speech from the Throne medal still carries the fragrance of Germany’s optimistic autumn of 1914, expecting early victory.

German medalists were among the most prolific creators of patriotic medals at the beginning of World War I. In all warring countries in that late summer of 1914, popular jubilation inspired popular medals that swiftly sold out, followed by additional issues radiating confidence in swift, certain and glorious victory.

Some were struck before the bullets began to fly, including several hailing the Aug. 4, 1914, “Speech from the Throne” delivered by Kaiser Wilhelm II before the imperial parliament or Reichstag. Numismatist Georg Zetzmann cataloged these medals in his Deutsche Silbermedaillen des I. Weltkriegs (H. Gietl Verlag, 2002).

The obverse is a character vignette of Kaiser Wilhelm II, who once called uniform “the work clothes of the imperial family.”

He wears the glittering uniform of the Garde du Corps with steel breastplate and lobster-tail helmet crowned with the single-headed imperial eagle.

The reverse has a naked sword with point up, and a quotation, IN AUFGEDRUNGENER NOTWEHR MIT REINEM GEWISSEN UND REINER HAND ERGREIFEN WIR DAS SCHWERT, which translates to “Let us grip the sword in the self-defense forced upon us, with clear minds and pure hands.”

The edge is inscribed SILBER .990.

One hundred years after issue, however, this prooflike Speech from the Throne medal still carries the fragrance of that optimistic autumn, soon replaced with the grimmer endurance of the following years.