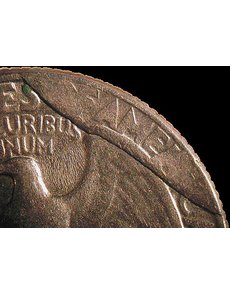 The reverse face of this 1966 Washington quarter dollar shows a retained cud. In this and other recent issues, prior to 1992, the reverse die was always the anvil die. 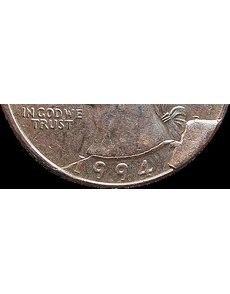 A dubious retained cud lies next to a conventional cud in this 1994-P Washington quarter dollar. A partial collar flange confirms that the obverse face was struck by the hammer die. 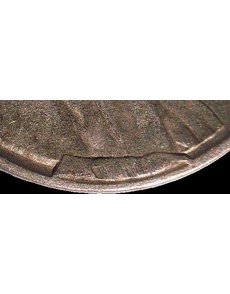 An impressive degree of lateral spread and horizontal offset suggests that this 1943-S Lincoln cent might have a true retained cud at the base of Lincoln’s bust. 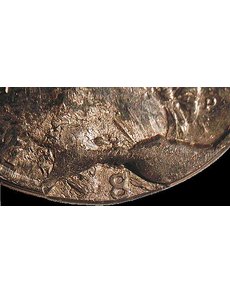 A retained cud extended past the plane of the badly damaged die face that struck this 1998-P Washington quarter dollar. A partial collar error confirms that the obverse face was struck by the hammer die. 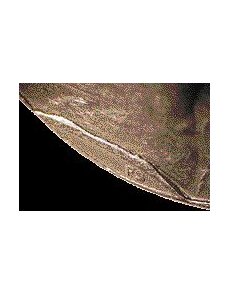 When a fragment breaks off the edge of a die, it isn’t always lost. Those that remain more-or-less in place are called “retained cuds” or, more technically, “retained marginal die breaks.”

They’re usually found on the anvil die because the die fragment (assisted by gravity) has a tendency to sink down and wedge itself between the intact portion of the die neck and the collar. This is why retained cuds often appear on a coin as an island of design that sits atop a low plateau. A 1966 Washington quarter dollar provides a representative example of a retained cud involving the anvil (reverse) die.

Most alleged retained cuds of the hammer die are probably still attached to the die neck. Modest amounts of displacement in the vertical or horizontal plane would presumably be due to subsurface deformation beneath a cracked die face.

The illustrated 1994-P Washington quarter dollar displays both a conventional cud (at 5:00) and an alleged retained cud that encompasses the date. The latter shows a tiny amount of vertical displacement (a stepped interruption) all along the line of breakage. While vertical displacement has always been considered a reliable diagnostic for retained cuds, a step this slight can easily be attributed to subsurface deformation. After all, many bilevel (stepped) die cracks show vertical displacement more exaggerated than this.

With no known mechanism to hold a die fragment in place, subsurface deformation beneath a rim-to-rim die crack would seem a better explanation for the observed vertical displacement.

Our next example, a 1943-S Lincoln zinc-coated steel cent, shows a small segment of Lincoln’s bust widely displaced toward the south. This shift incorporates both lateral spread and horizontal offset (a sliding dislocation). Little vertical displacement is exhibited, however.

While subsurface deformation could account for such severe displacement, there is another possibility. It’s possible that the die fragment broke free, shifted position, and then fused to the roof of the die void during the next strike. Bits of metal have certainly been shown to occasionally stick or fuse to a die (Collectors’ Clearinghouse October 17, 2011, and June 10, 2013). Such events can result in repetitive struck-through errors.

A heavily damaged obverse die with a presumed retained cud struck our final example, a 1998-P Washington quarter dollar (full images can be seen in the Sept. 19, 2011, column). The retained cud, which carries the last two digits of the date (one destroyed), shows significant vertical displacement and lateral spread. The die fragment may have fused to the void in the die face, or it may have simply broken off as this coin was struck (in which case it can’t be considered retained).

The gap between the retained cud and the rest of the design looks wider than it actually is due to the presence of an overlapping, dumbbell-shaped, rim-to-rim cud.

Unexpectedly, the die fragment extended past the plane of the die face, leaving the corresponding design on the coin recessed relative to the rest of the design. It may be that a small piece of die shrapnel or foreign debris wedged itself in the gap between the die fragment and the intact portion of the die neck, forcing it to protrude.