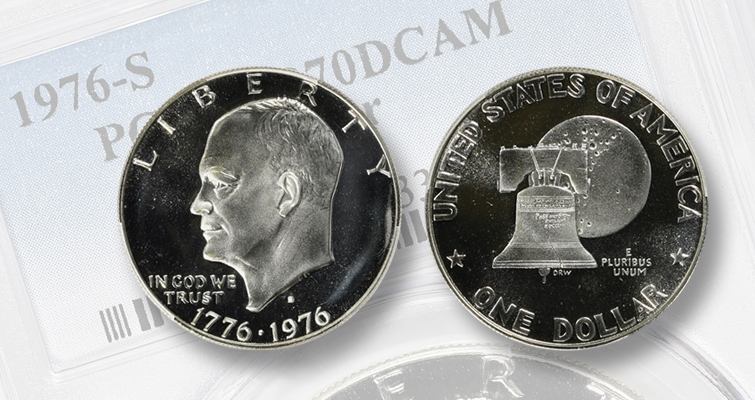 The U.S. Mint struck circulating commemorative Washington quarter dollars, Kennedy half dollars and Eisenhower dollars between 1975 and 1976, all carrying the dates as 1776–1976, with new reverse designs celebrating the Bicentennial of the United States.

Dennis R. Williams created the dollar’s new reverse design, with the Liberty Bell superimposed on the moon. The dual-dated coins were struck for circulation at the Philadelphia and Denver Mints, and Proof coins struck on both copper-nickel clad and silver-copper clad planchets were produced at the San Francisco Mint.

None of these is particularly scarce, although in top grades any can be condition rarities, in demand from registry set collectors, like this 1976-S Eisenhower silver-copper clad dollar graded Proof 70 Deep Cameo by Professional Coin Grading Service that sold for $1,242 on Aug. 1 at GreatCollections. The vast majority of examples crossing the grading desks at PCGS have been certified Proof 69 Deep Cameo — 40,512 as of Aug. 2 — while 166 have received a “perfect” grade, a tiny percentage of the original mintage of 4 million. 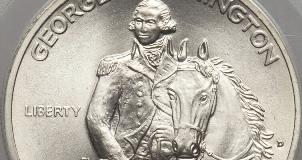 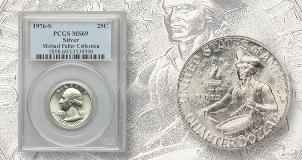 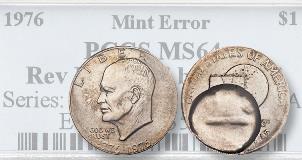