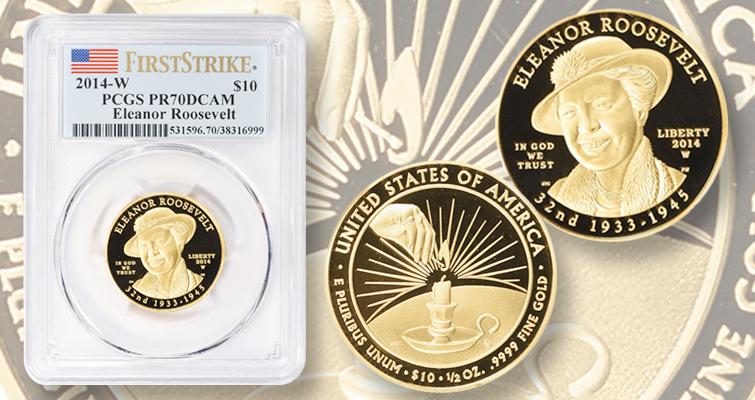 Proof and Uncirculated 2014-W Eleanor Roosevelt, First Spouse gold $10 coins went on sale Sept. 4 that year. The maximum mintage was set at 10,000 across all product options, with customer demand determining the ratio of Proof coins to Uncirculated coins produced. Demand was under-whelming, despite her being one of the better-known first ladies of the era; recent U.S. Mint figures report 1,866 Mint State coins and 2,377 Proof piece were sold, for a total mintage of 4,236. The low sales make the Eleanor Roosevelt coin a key in the First Spouse series.

The issue was well-produced, and most certified by Professional Coin Grading Service are graded Proof 70 Deep Cameo. GreatCollections offered one in this grade, housed in a PCGS First Strike holder, that sold for $2,094.75 on June 21. The price was roughly double what similarly graded common issues in the series realize.

The most popular First Spouse issue, the 2007-W Thomas Jefferson, Liberty gold coin, doesn’t depict a first spouse, but carries instead Robert Scot’s Draped Bust design from the 1800 to 1808 half cents, since Jefferson was unmarried during his presidency. 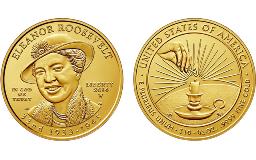 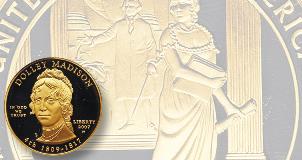 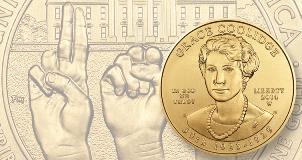