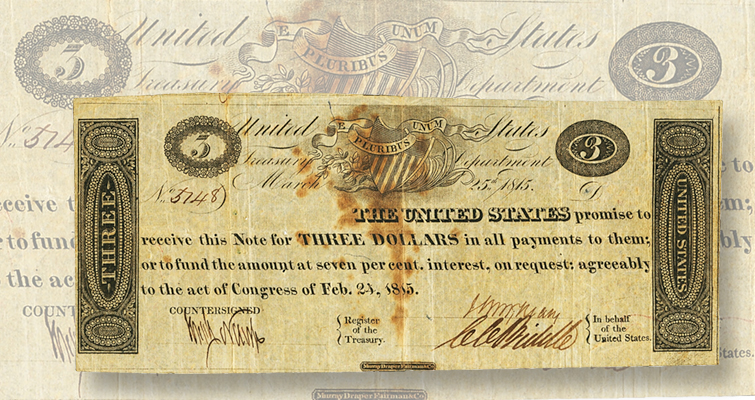 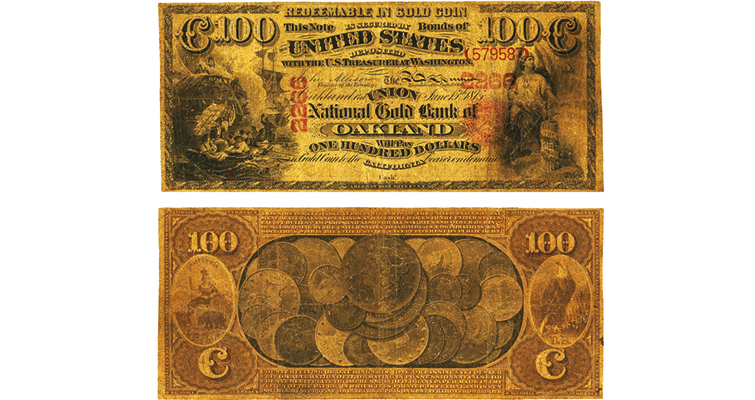 The Heritage Auctions sale of the Mike Coltrane Collection of United States currency in Dallas on Nov. 4 and 5 offered few surprises. The 484 lots resulted in sales worth $2,598,341, including the buyer’s fee.

As expected, the leading item was the only known $3 bill issued by the United States, a Treasury note of the War of 1812. At $168,000 in a grade of Very Fine 25 by Paper Money Guaranty, it sold at the lower end of its estimated selling price.

The unusual denomination, issued under the Act of Feb. 24, 1815, was fully issued and uncanceled, with three signatures. It corresponds to Friedberg number TN-16b in Paper Money of the United States. It is from the fifth and final issue of these Treasury notes that were used as an emergency measure to raise revenue during the War with Great Britain. The first four were in denominations from $20 to $1,000. The final issue, in 1815, was in smaller denominations, from $3 to $50, which were used to pay for good and services, customs duties, and as cash reserves for banks. They are considered by many to be the first circulating American paper currency, predating the demand notes of 1861 by over four decades. The $3 note was one of 21 War of 1812 notes in the sale.

Only eight notes of all denominations are known today from the Union National Gold Bank of Oakland. The Oakland note is one of a number of notes from the Albert Grinnell collection to recently appear at auction. At the Grinnell sale in 1945, it sold for $125.

The “Net” designation in the grade is due to some restoration, but it should be understood that any national gold bank note in a grade higher than Very Good is a rare find.

An iconic “Spread Eagle” Series 1863 $100 legal tender note in PMG Choice Very Fine 35 brought $87,000, $11,000 more than when it was last sold by the firm (to the present consignor), in 2018. This is the first note to feature the American eagle as part of the design, on which it dominates the entire left side of the obverse.

Among Treasury notes, the $100 “Watermelon notes” of the Series 1890 issue get most of the attention, leaving the $50 note somewhat underappreciated. There are 35 examples of the F-377 $100 Watermelon note in the Track and Price census, as opposed to only 22 of the F-376 $50 notes. One reason may be that the $50 note was issued only in Series 1891, where the backs are more mundane compared to the ornate lathe work on all issues of the 1890 series. Nonetheless, it is of greater rarity. The Coltrane Collection example once belonged to Amon Carter. It was in PMG Very Fine 25 and realized a respectable $87,000, the highest price ever for the grade. 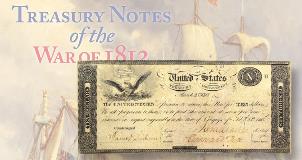 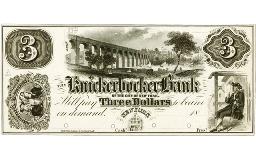 $3 proof for the Knickerbocker Bank in Stack's Bowers Aug. 7 sale