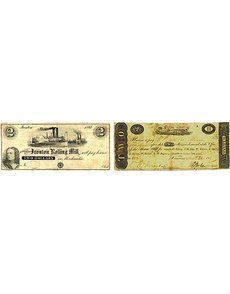 One of the popular ways to collect obsolete paper money is thematically. Some collectors are attracted to notes depicting, for example, trains, sailing ships, Native Americans or coins. One such popular topic is the uniquely American steamboat.

Robert Fulton has long been associated with the invention of the steamboat, although it is more correct to say that he was the first to successfully commercialize the concept of a steam-powered vessel. After exploring technical advances in Europe, Fulton purchased a steam engine and put the steamboat Clermont into passenger service between New York City and Albany in 1807. The 150-mile trip was made in 32 hours.

Soon steamboats, whose distinctive shallow drafts instantly made many rivers navigable, were providing transportation of both passengers and freight along rivers such as the Ohio and Mississippi rivers to far flung ports such as New Orleans, Cincinnati, St. Louis and Pittsburgh.

Unfortunately, primitive safety technology and navigation aids led to a high incidence of fires, boiler explosions and sinkings due to striking snags or other unseen obstructions. Between 1811 and 1899, more than 450 steamboats were lost due to such accidents. In the worst American maritime disaster, the steamboat Sultana, carrying 2,300 recently released Union prisoners of war plus civilian passengers and crew, exploded and sank at 2 a.m. on April 27, 1865, just seven miles north of Memphis. Seventeen hundred died.

In spite of these horrific accidents, steamboats were beloved by many as symbols of power, technology and luxury. They were often “floating palaces” with luxurious accommodations. For many small towns along a river, the arrival of such vessels, even if just for a few minutes to replenish wood fuel supplies for the boilers, was a special event.

Steamboats have appeared on notes almost since the day that the vessels were introduced. The 1819-dated note from Vincennes, Ind., shows a very early steamboat while the Ironton, Ohio, note depicts a paddle-wheel steamboat from the golden age of steamboating. Why not consider adding a fleet of steamboats to your collection!