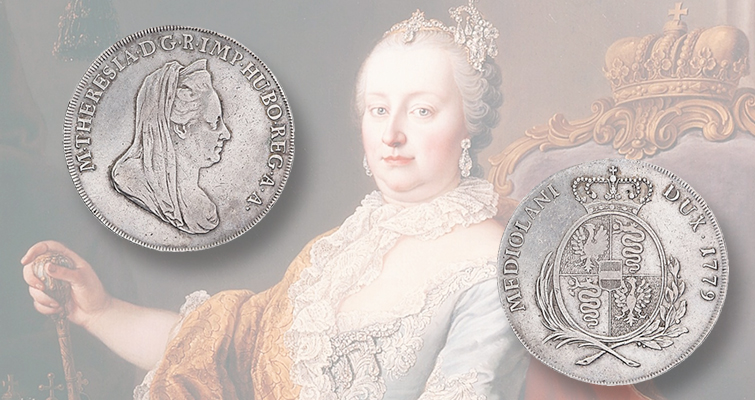 A 1779 silver scudo (6-lira coin) of Milan and issued for Maria Theresa, shows the empress late in her life, in a different image than on the ubiquitous talers bearing her name.

Maria Theresa, the only female ruler of the Habsburg dominions and the last of the House of Habsburg, is recognized in coin collecting circles for the ubiquitous silver trade taler that bears her image.

The coin circulated across much of Europe and Africa. Ruler of Austria, Hungary and their domains, her image continues to be struck on these coins, centuries after her 1780 death.

But that coin is far from the only one to depict the woman who served as Holy Roman Empress (by marriage). For evidence, look no further than Karel de Geus’ auction No. 42, scheduled for Oct. 24 in Veldhoven, Netherlands. Several coins in the sale show the famed leader, but consider the marquee offering in silver.

The 1779 silver scudo or 6-lira coin shows the Archduchess of Austria on the obverse, with coat of arms, crown and royal legends on the reverse.

The image on the scudo depicts the ruler late in her life, with a fuller veil and less defined hair curls, making the image slightly different from her image on the ubiquitous taler.

The scudo coin was issued for Milan as part of the Austro-Hungarian empire. The scudo or 6-lira coin was the largest denomination silver coin of Italy at the time.

Researchers classify the example in the auction as Davenport 1386 (European Crowns by John Davenport).

The auction house reports the scudo in its sale is in Very Fine condition, with an estimate of €150 (about $168 U.S.).