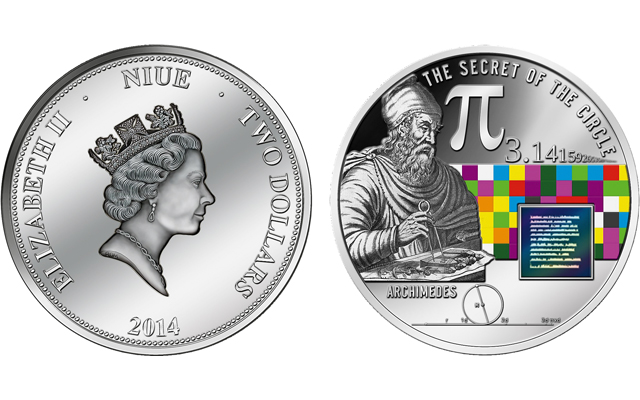 Math’s most famous figure, Pi, is celebrated throughout the world on March 14 (3/14 in the American style) and the 2015 celebration is particularly special.

Add the year to the naming convention, and you get 3/14/15, the first five digits of the mathematical constant, the ratio of a circle’s circumference to its diameter, which approximately equals 3.14159.

Pi is also celebrated on a coin.

In 2014, the Helvetic Mint issued a Prooflike .999 fine silver $2 coin for Niue that features the first 1 million digits of Pi. The digits are encoded on an 11-millimeter-square “nanojem,” which under extreme magnification can be read. And that is only part of Pi, as some 1 trillion digits of the never-ending decimal representation have been discovered.

Pi never settles into a permanent repeating pattern. In mathematical terminology, it is an “irrational” and a “transcendental” number, it never repeats and never ends. It has been represented by the Greek letter pronounced "Pi" since the mid-18th century.

The earliest written approximations of Pi are found in Egypt and Babylon, both within one percent of the true value. In Babylon, a clay tablet dated 1900 to 1600 B.C. has a geometrical statement of Pi.

The first recorded algorithm for rigorously calculating the value of Pi was a geometrical approach using polygons, devised around 250 B.C. by Greek mathematician Archimedes.

The Niue coin weighs 50 grams, measures 50 millimeters in diameter and was limited to a mintage of 500 coins.

Like the elusive search for additional digits to Pi, the search for the coin in the secondary market may prove elusive.