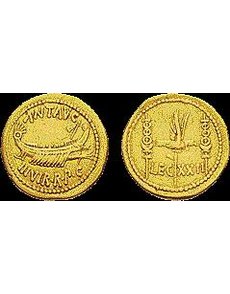 Though almost every known legionary coin of Marc Antony is a silver denarius, some gold aurei also survive, including this apparently unique piece dedicated to the 22nd legion. 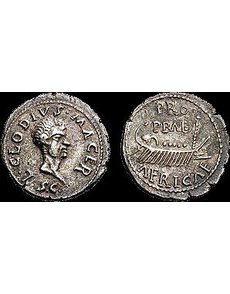 With the centennial year of Actium fast approaching, the rebel Clodius Macer made use of Marc Antony’s iconic designs for his own denarii of A.D. 68. This one bears Macer’s portrait and a war galley. 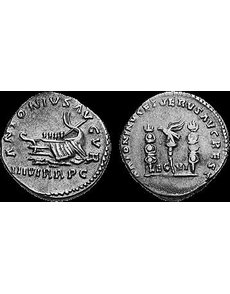 This denarius of the emperors Marcus Aurelius and Lucius Verus copies Marc Antony’s coinage. It seems to have been struck for the bicentennial of Actium, which occurred in A.D. 169. 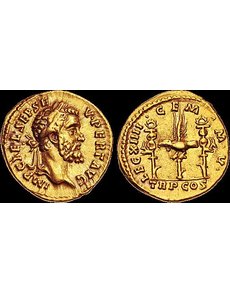 The emperor Septimius Severus copied Marc Antony’s reverse type on a series of coins he issued during a Roman civil war that sparked in A.D. 193. This gold aureus honors the 14th legion.

The “legionary denarii” of Marc Antony are among the most recognizable and collectible of all ancient coins. Not only do tens of thousands survive, but they are of great historical importance and have an iconic design that is familiar even to those who know little about ancient coins.

After Julius Caesar was murdered in 44 B.C., his two leading supporters, Marc Antony and Octavian (Augustus), clashed. When neither made headway, they became unwilling allies. By 32 B.C., however, they had tired of their fair-weather alliance and were sworn enemies. Antony had assumed command in the east of the Mediterranean, and Octavian in the west. Their final battlefield was at the port city of Actium, on the western coast of Greece.

In the years prior to the battle, Antony had joined forces with Cleopatra VII, the Greek queen of Egypt, who considered that alliance the best option for saving her kingdom. Meanwhile, Octavian had long maintained a partnership with Marcus Agrippa, one of Rome’s most gifted generals, whose tactical skills and loyalty allowed Octavian to triumph against all odds.

The Battle of Actium occurred on Sept. 2, 31 B.C., and involved both naval and land forces. Once it became clear that Octavian and Agrippa would triumph on that day, Antony and Cleopatra broke through the naval blockade with a portion of their fleets. Cleopatra returned directly to Egypt, whereas Antony tried (and failed) to raise more troops before joining her.

Before Octavian came to Egypt in pursuit, Antony committed suicide. Cleopatra did the same, but not before she met with Octavian and determined that he was unwilling to negotiate.

With Cleopatra’s death, Egypt fell into Roman hands, bringing to an end three centuries of Greek rule in Egypt.

Though Antony produced a variety of coin types from 44 to 31 B.C., the legionary type is by far his most common and most familiar. It is so-named because of its advertisement of large military units, called legions. His silver denarii bear the name of one of his 23 regular legions or two specialized units (the praetorian cohorts and the cohort of speculatores). The representation of gold aurei seems to have been more limited — coins are only known naming the praetorian guards and eight legions, though over time more are likely to turn up.

Though the series offers great variety because so many legions and units are named, all variants share a single coin type, which features on the obverse a war galley with oars engaged and on the reverse a legionary eagle standard (aquila) between two legionary standards (signa or vexilla).

All of the legionary denarii appear to have been struck circa 32 to 31 B.C. while Antony was in Greece preparing for his war against Octavian. The silver content of Antony’s legionary denarii is low for the era, seemingly because Antony had to stretch his limited resources.

The poor silver quality of these coins would have been unpopular at the time, and their low silver content made them so undesirable in commerce that they remained in circulation for a very long time — sometimes more than 250 years. By the early third century A.D., silver coinage had declined enough in weight and purity that a slick legionary denarius was of similar intrinsic value to a current denarius.

Before Antony introduced his legionary type, three Roman denarii showing legionary standards in the same format were struck. The first was struck in about 82 B.C. by moneyer C. Valerius Flaccus, the next in about 49 B.C. by Cn. Nerius, and the last in about 42 B.C. by Octavian. None of these issues is especially large, and it is impossible to say which, if any, served as a prototype.

Antony struck millions of his legionary denarii, and they would have been well known in their day. An ally of Antony named L. Pinarius Scarpus used the legionary standards reverse for his own denarii, which he produced in North Africa in 31 B.C., just prior to the Battle of Actium.

In future centuries the three-standards design from the reverse proved to be much more popular than the galley design from the obverse, at least to the degree that its origin on other coins can be traced to Antony’s issues. Since most coinages of the empire had an imperial portrait on the obverse, there was usually room for only one of the two original designs. On those grounds there may have been a preference for the three-standards design, since it was the reverse type on the original coinage.

The first important reuse of Antony’s designs occurred a century after the Battle of Actium. The timing was not coincidental: the three-standards type was used by the emperor Nero (A.D. 54 to 68) during the period A.D. 67 to 68, and it was also used in A.D. 68 by three of Nero’s challengers, Vindex, Clodius Macer and the future emperor Galba.

Clodius Macer, whose rebellion was based in North Africa, issued a diverse, if limited, series of denarii. He paid special attention to Antony’s coinage, using both the galley and legionary standards designs.

The three standards were also displayed on silver cistophori (3-denarius coins) that the Romans made especially for use in Asia Minor. Large quantities with this reverse type were struck for the emperors Titus, Domitian, Nerva, Trajan and Hadrian, collectively covering the years A.D. 80 to circa 132. The last two of these emperors also used the design on some of their regular imperial coins.

The next great occasion for reusing Antony’s legionary designs was the bicentennial year of Actium, A.D. 169, for which denarii were struck by the co-emperors Marcus Aurelius and Lucius Verus. Just as with the centennial issues of Clodius Macer, both designs were employed — this time on a single coin that was meant to replicate the original issue.

The three-standards motif was also recycled for civil war coinages of A.D. 193 and A.D. 312 to 313. The first of these issues was struck by the emperor Septimius Severus (who, like Antony, honored multiple legions), and the latter was struck by the emperor Constantine I “the Great.” Thereafter, Antony’s types, like many familiar images of the pagan Roman world, fade into obscurity as coinage takes on an increasingly Christian character. ¦