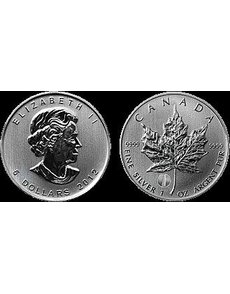 Canada’s latest Maple Leaf silver $5 coin with a special privy mark honors the Leaning Tower of Pisa. The third coin in a sporadic series has a mintage limit of 50,000 pieces.

A new coin from Canada continues a popular series targeted to European collectors.

The Royal Canadian Mint has released the third Maple Leaf .9999 fine silver $5 coin from the “Great Landmarks and Monuments of Europe” series of the coins bearing privy marks, a usually small device used on coinage. The privy mark on the new coin celebrates the Leaning Tower of Pisa in Italy. The two earlier coins in the series are a Specimen Finish 2009 Maple Leaf silver $5 coin marking London’s Tower Bridge and a Reverse Proof 2009 silver $5 coin honoring Berlin’s Brandenburg Gate.

Today, privy marks are generally used for marketing and promotional purposes, and are often commemorative in nature. The added adornment brands the coin as special, and can be a logo, words or a combination of the two.

Though the coin is part of a series released only in Europe, an American distributor, Talisman Coins (an official RCM distributor) has acquired some of the pieces for sale in the United States. The 2012-dated coin features a privy mark of the famous Italian landmark Leaning Tower of Pisa (Torre pendente di Pisa), which was built as the freestanding bell tower of the cathedral (duomo) of the Italian city of Pisa. The tower stands just over 183 feet (55.86 meters) from the ground on the low side and 186 feet (56.70 meters) on the high side.

Construction of the Tower occurred in three stages across 177 years, beginning on Aug. 8, 1173. The tower began to sink just after construction had progressed to the second or third floor (sources vary) in 1178 because the tower’s foundation was set in weak, unstable subsoil.

War halted construction for nearly a century, allowing the underlying soil to settle. Construction resumed in 1272 for a dozen years, with engineers compensating for the tower’s tilt by building upper floors with one side taller than the other. Because of this, the tower is actually curved.

The seventh floor was finally completed in 1319, and the belfry finally added in 1372.

The tower has both 294 and 296 steps, because the seventh floor has two fewer steps on the north-facing staircase. Prior to restoration work performed between 1990 and 2001, the tower leaned at an angle of 5.5 degrees, but now leans at about 4 degrees, meaning that the top of the tower is displaced horizontally nearly 13 feet from where it would be if the structure were perfectly vertical.

Stabilization efforts during the 1990s were successful, straightening the tower by 18 inches, returning it to its position of 1838.

The privy mark on the Specimen Finish coin reflects the tower’s tilt, a sight that draws hundreds of thousands of tourists annually. Specimen Finish is described as a three-fold combination of different finishes: the raised area (relief) includes both brilliant and mirrored surfaces, while the fields (background) are subtly striated, resulting in a contrasting, matte appearance. No other mint in the world employs the Specimen Finish, according to the RCM.

Susanna Blunt’s effigy of Queen Elizabeth II appears on the obverse of the coin, with the date, denomination and the queen’s name also shown.

The reverse depicts the single Maple Leaf design created by Stan Witten, with the privy mark to the left of the maple leaf’s stem. Inscriptions reading FINE SILVER 1 OZ and 9999 reflect the metal, weight and purity of the coin.

The coin weighs 31.39 grams, measures 38 millimeters in diameter and has a mintage limit of 50,000 pieces. The coins are packaged in an archival quality mylar holder