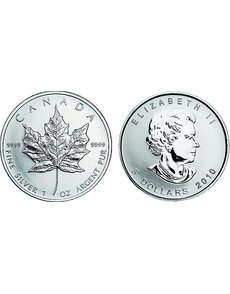 The total figure of 17,879,270 1-ounce coins was the highest sales of silver Maple Leaf products in RCM history, and represents a 74 percent increase from the 10.3 million 1-ounce coins sold in 2009, according to figures released as part of the RCM’s annual report in late June.

According to the report, “Demand continues to be driven by global economic and financial instability.”

Canada’s silver bullion sales in 2010 include the 79,278 Olympic silver Maple Leafs sold in 2010, on the tail-end of a three-coin program. The sales figure also includes sales of the 2011 Wolf 1-ounce silver bullion $5 coin, the first release in a three-year, six-coin series honoring Canadian Wildlife. With a mintage of 1 million pieces, and a design that has proved popular on several occasions, the Wolf coin was a quick sellout.

With or without counting the Olympic- and Wildlife-themed Maple Leaf silver coins, the sales increase for the traditional Maple Leaf coin design is notable.

Demand for silver Maple Leafs helped push sales of all of the RCM’s bullion coins (including gold and platinum coins) to where the bullion sales accounted for 89.3 percent of all revenue for the RCM. A total of 76 percent of sales of bullion products were to the U.S. market, an increasingly important market for the RCM; in 2009, bullion coin sales to the U.S. market accounted for 64.8 percent of the Royal Canadian Mint’s $1.7 billion revenue from the bullion business.

Bullion coins (as well as collector coins) are struck at the Ottawa Mint.

The Maple Leaf silver bullion coin program made its debut in 1988, and when it was introduced, the coins offered a higher purity level than anything then on the market at .9999 fine.

The RCM adopted the recognizable design of a single maple leaf for the reverse of the silver coin. The Maple Leaf design was first used for the gold Maple Leaf bullion coins when they were introduced in 1979.
An effigy of Queen Elizabeth II graces the obverse of the Maple Leaf coins. Three separate and distinct portraits have been used during the life of the program, the designs reflecting a graceful aging of the queen.