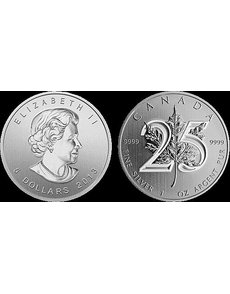 A 2013 modified design marks the 25th anniversary of the Maple Leaf silver $5 bullion coin from the Royal Canadian Mint. In total, 1 million examples are being issued.

Delivery of the coins was expected to follow in the two weeks following the release date in early December, according to distributors.

The anniversary coin features the traditional Walter Ott reverse design of a single leaf with the standard inscriptions, with the addition of the numeral 25 overlaid on the leaf.

The Susanna Blunt effigy of Queen Elizabeth II appears on the obverse, and is the third effigy to appear on the Maple Leaf coins since the gold program debuted in 1979. Arnold Machin’s effigy opened the series and continued through 1989, and Dora de-Pedery Hunt’s effigy was used from 1990 to 2003.

Silver Maple Leaf coins debuted 25 years ago, in 1988, with the highest face value for a comparable 1-ounce silver bullion coin.

In addition to the metal fineness and weight, the standard design has remained constant. (Brand extensions include the three coins issued to commemorate the 2010 Vancouver Winter Olympics, a six-coin Wildlife series issued from 2010 to 2013, and multiple privy mark examples.)

Silver Maple Leafs were introduced less than a decade after the Royal Canadian Mint launched the gold Maple Leaf program.

The 25th anniversary coins are delivered to bullion distributors like other traditional Maple Leaf silver bullion coins — in white plastic tubes of 25 coins in a plastic box of 20 tubes, for a total count of 500 coins. Individually wrapped examples in what collectors call Thermotron plastic may be available, if a distributor orders them, at a higher cost per coin.

The anniversary coin is limited to a mintage of 1 million pieces (as were all six issues in the recently concluded Canadian Wildlife silver Maple Leaf series) and, like the Wildlife releases, is offered by the RCM and its distributors for a slight premium (about $2) above the premium charged for a standard silver Maple Leaf. The distributors sell the coins to other merchants and directly to the public, at prices based on the price of silver, plus the premiums.

The Royal Canadian Mint does not disclose the premiums it charges distributors.