Many split-die error coins may have to be demoted 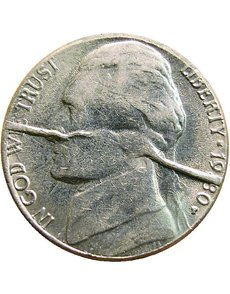 A median split die crosses the obverse face of this 1980-P Jefferson 5-cent coin. Even though the split is interrupted, its great width and lack of taper argues against any other diagnosis. 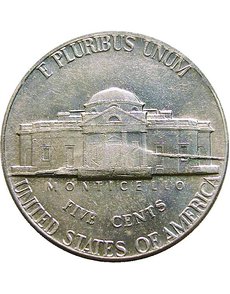 This 1974-D Jefferson 5-cent coin has two radial, antipodal die cracks that pinch out as they enter a zone of subsidence. Such coins might be mistakenly labeled as a split die error. 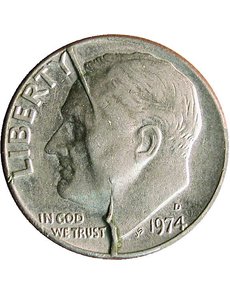 There is no way to establish whether the two wide die cracks on this 1974-D Roosevelt dime link up in the middle. However, one crack seems to pinch out as it enters the zone of subsidence. 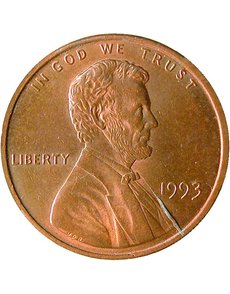 This 1993 Lincoln cent shows a single, wide radial die crack near the date (to the left and below).

One of the rarest forms of brittle die fracture is the split die. A split die is an overgrown rim-to-rim die crack that extends deep into the die neck. The sides of the split spread apart, leaving a thick raised line on the surface of the coin. A split can bisect a die (a median or bisecting split) or can lie off to one side (an asymmetrical split). It can be straight or curved.

Shown here is a 1980-P Jefferson 5-cent coin struck by an obverse die with a very wide median split. The northern half of the die splayed out so far that the word liberty is cut off along the edge of the coin.

As rare as they are, many current split dies may have to be downgraded. This revelation was sparked by a 1974-D Jefferson 5-cent coin recently acquired from Ronnie Braswell. The reverse face seems to show a median split die. However, the two arms of the presumed split fail to meet in the center. Instead, they pinch out as they enter a weakly-struck bulge in the middle of Monticello. The bulge represents a die subsidence error.

The portico of Monticello is weakly struck because the sunken portion of the die was too distant from the planchet to generate much striking pressure. Nevertheless, the design is complete, and it is clear that no die crack crosses it or passes above or below it.

Instead of a split die, what we have is a pair of radial, antipodal die cracks. This finding calls into question the status of many median split dies, as these are frequently interrupted in the middle.

A typical gap is displayed in a 1974-D Roosevelt dime. The two arms of the presumptive split disappear into a featureless bulge — also a die subsidence error. The absence of design details is partly due to reduced effective striking pressure in this area. But it also reflects a genuine loss of detail in the corresponding recess of the die face. This is shown by the absence of tumbling marks on the surface of the bulge. Tumbling marks — abundant on most planchets — should persist in any area not contacted by the dies.

For the longest time, the featureless bulge of this and other specimens provided a handy excuse as to why the split couldn’t be seen in the center of the coin. One could argue that there wasn’t enough striking pressure to force coin metal into the split. Or maybe the split imperceptibly hugged one side of the bulge. Or perhaps the split surrounded the zone of subsidence, converting it into a retained interior die break. The oval shape of many subsidence zones seemed to support the latter conjecture.

Braswell’s 5-cent coin undermines the general applicability of these rationalizations. With eyes newly opened, a closer inspection of the 1974-D Roosevelt dime reveals that a continuous split is unlikely or at least questionable. The arm that arises at 6:00 tapers to a point before it disappears.

Diagnosing a median split die has now become a complicated procedure that may not always yield a clear answer. If the split is continuous or phenomenally wide, diagnosis is simple. In all other cases, a series of questions must be asked concerning the paired arms and the gap that separates them. 1) Does the interruption coincide with a central elevation? 2) What is the nature of that elevation? Is it a die subsidence error, an interior die break, or a retained interior die break? 3) Do the two arms follow one side of the central elevation, surround the elevation or plunge into the elevation? 4) Does either arm taper or pinch out as it approaches the center of the coin? 5) Are the two cracks aligned with each other or offset? On Braswell’s coin, the die crack on the left peters out as it enters the top of Monticello’s staircase. The crack on the right is much higher and pinches out almost halfway up the nearest column. 6) How wide is the gap separating the facing tips of the two arms?

The close association between median split dies, radial antipodal die cracks and die subsidence errors is meaningful but murky. At the very least, it testifies to a hard, brittle die exterior and an abnormally soft interior. Both probably stem from faulty heat treatment (e.g., tempering, quenching).

It may be that the die sinks in first. This might increase stress on the surrounding donut of die steel that has to absorb all of the strike force. This, in turn, might generate a pair of opposing radial cracks. Crack lengthening may stall upon reaching the zone of subsidence, as the softer die steel may interfere with crack propagation.

One flaw in this proposed sequence is that I’ve not yet encountered the first stage — a crack-free coin with a centrally located zone of subsidence. It may instead be that the two defects appear simultaneously or that crack formation precedes the sinking-in of the die face. I have seen radial die cracks — some as long and as wide as those seen in Braswell’s coin — appear in otherwise normal-looking dies. However, I have encountered wide radial die cracks in dies that did not sink in. One example is shown in a 1993 Lincoln cent.

Right now, unless a median split die is phenomenally wide, or is uninterrupted, the diagnosis is uncertain. It may instead be a pair of radial die cracks.