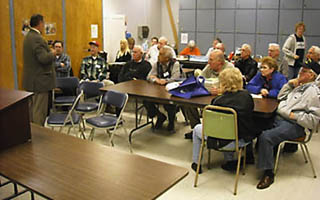 According to MCCC official Richard Jozefiak, record attendance filled the meeting room to capacity at the Huntsville-Madison County Senior Center in Huntsville. MCCC members and guests heard the visiting ANA President give what was billed as an interesting and fun presentation on “Dumb Coins.” A “dumb coin” is a numismatic term used to describe coins that do not have on them their country of issue, denomination or value. Attendees were each given a sample of a “dumb coin.”

The evening included the presentation of a number of awards.

Ostromecki presented “Numismatic Point of Light” awards to MCCC members Mike Campbell and Robert (Bob) Jaques. Campbell has served as MCCC Treasurer since the founding of the club in 2001. Jaques served as MCCC President for a number of years, and is a current MCCC board member.

The Madison County Coin Club also was presented the “Numismatic Point of Light” award for the club’s numismatic service to the hobby.