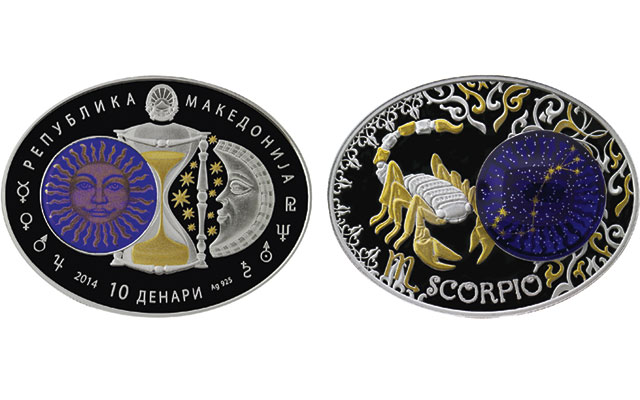 The fourth Proof silver 10-denars coin in Macedonia’s Signs of the Zodiac series showcases the Scorpio, representing individuals born from Oct. 23 to Nov. 21.

A new Proof .925 fine silver 10-denar coin in the Signs of the Zodiac series was issued in early October by the National Bank of the Republic of Macedonia, through distributor International Coin House AG.

The Scorpio is the fourth coin in the series, which began with a coin for Leo released in July.

A scorpion is the sign of those born Oct. 23 to Nov. 21. The reverse of the coin shows a scorpion, with partially gold printed claws and tail, and a cobalt glass insert depicting the Scorpio constellation. The symbol for Scorpio and the inscription SCORPIO also appear.

The obverse of the coin carries the coat of arms of the Republic of Macedonia, surrounded by inscriptions that include the nation’s name, the coin’s denomination, year of issue, and metal composition and fineness.

Symbols of seven planets (excluding Earth) and Pluto appear on the design, with an image of the sun and moon flanking an hourglass in the middle.

The sun is represented via gold ink printed on the cobalt glass insert, and gold ink highlights the hourglass and stars near the moon.

The oval coin measures 45 millimeters wide and 35 millimeters tall. The coin weighs 21 grams and has a mintage limit of 7,000 pieces.

The price of the coin has not been established by the issuer, and distributor information is still forthcoming.