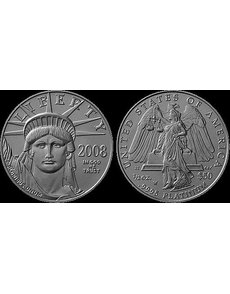 In most cases, mintage correlates directly with a coin’s availability. For the time being, the smallest final mintages of all U.S. modern coins belong to Uncirculated 2006-W and 2008-W American Eagle platinum coins.

In 2006, the U.S. Mint started selling specially burnished, Uncirculated versions of bullion coins directly to the public. The coins have a W Mint mark, for the West Point Mint, and, for the platinum American Eagles, had the same designs as the Proof version of the coin, which changes each year. While the Uncirculated coin program continues for 1-ounce silver and gold coins, it was short-lived for the platinum pieces, discontinuing in 2008.

These Mint-marked, Uncirculated bullion coins are often referred to as the “burnished” issues, because the Mint described them on its website as being struck on “specially burnished blanks.”

So here are eight platinum coins with mintages between 2,253 and 3,706 pieces. Despite the low mintages, both four-coin platinum sets can be purchased for around twice their platinum melt value.

According to John Maben, CEO of Modern Coin Mart, “these coins are still available ... for now.” He says that he is able to acquire a half dozen or more sets a year of these elusive issues to place with his customers because many were initially bought by speculators and therefore are not locked up in the hands of collectors.

What does the future hold? Almost everyone seems to agree that these coins will get harder to find over time. California dealer Mitch Spivak observes that the low mintage Proof 2004-W American Eagle platinum coins actually appear less frequently on the market today and trade for more than the Uncirculated coins despite higher mintage figures. Over time, the Uncirculated 2006-W and 2008-W coins could become less available than the Proof coins as quantities are absorbed into the marketplace.

But as with all modern coins, the situation is dynamic, according to Spivak: “What looked like an incredible modern mintage a few years ago from the U.S. Mint (i.e., sub-3,000) has now become fairly commonplace due to the First Spouse gold coin series. In fact, two of the Uncirculated coins from 2011, Garfield and Hayes, might even challenge the lowest-of-the-low mintage burnished platinum coins from 2008 once the U.S. Mint releases it final audited mintage numbers at the end of this year.”