Love of lost and hidden treasure gold started in childhood 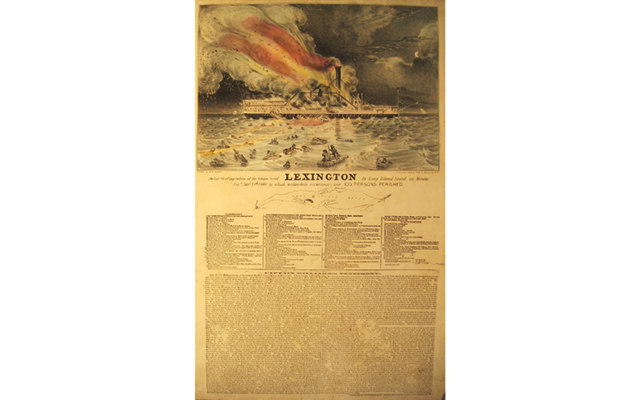 Nathaniel Currier’s hand-colored print illustrating the loss of the SS Lexington in Long Island Sound in 1840. This image was so popular that it had to be reprinted several times.

Ever since I was a kid, I have enjoyed reading about lost and hidden treasure.

When I was in second grade, in 1946, I enjoyed a copy of The Tower Treasure, the first volume in the popular Hardy Boys series. And, Edgar Allan Poe in 1843 could not have dreamed that the title of his “The Gold Bug” tale would be used generations later to describe people who loved the metal.

Poe’s fictional account was set on Sullivan’s Island off South Carolina — coincidentally the state from which the current treasure-hunting expedition by Odyssey Marine Exploration was launched. What the fortune seekers will find to add to the SS Central America coins and ingots  remains to be disclosed.

The Central America will never be topped, as no ship with more numismatically desirable gold has ever been lost. My A California Gold Rush History Featuring Treasure from the S.S. Central America was published in 2001. By that time, two other “treasure books” of mine had been published, American Coin Treasures and Hoards (1997) and The Treasure Ship S.S. Brother Jonathan: Her Life and Loss 1850-1865 (1999). I mustn’t forget to add a later book, The Treasure Ship S.S. New York: Her Story 1837-1846 (2008).

It must have been The Tower Treasure that started me off as an armchair treasure hunter. Whatever the catalyst, I am still adding stories, mostly factual, to my files. Actually, over a long period of years, most newspaper, magazine, and other accounts of real treasures have been at least in part fictional, as most publicity is exaggerated. When I started following the Central America and the work of the Columbus-America Discovery Group, many red herring tales were in the news. Fortunate for me when I wrote my book, Bob Evans, one of the original treasure finders, is a combination of a superb numismatist, skilled researcher, and a fine friend — so the information I gave in the book was all factual.

In contrast is the scenario surrounding the SS Lexington, which caught fire and was lost in Long Island Sound in 1840 with at least some gold coins aboard. It was the subject of the first popular Nathaniel Currier print. Some of its coins seem to have been found a decade or so ago, including early-date Coronet gold $10 eagles, but lawsuits and claims being what they are, I was never able to track down any specific information.

In my collecting accounts of lost cargo-laden ships there are quite a few lost “treasures” for which my search stopped with the first reading — such as a schooner of out Boston, headed south, which disappeared at sea with a cargo hold packed with ice!