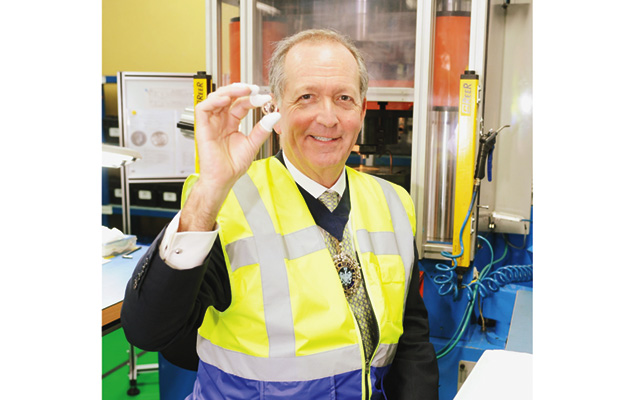 Alderman Allan Yarrow, the Lord Mayor of London, holds a gold sovereign coin that he struck during an official visit to India, where the Royal Mint has a licensing agreement to strike sovereign coins intended for the Indian market. 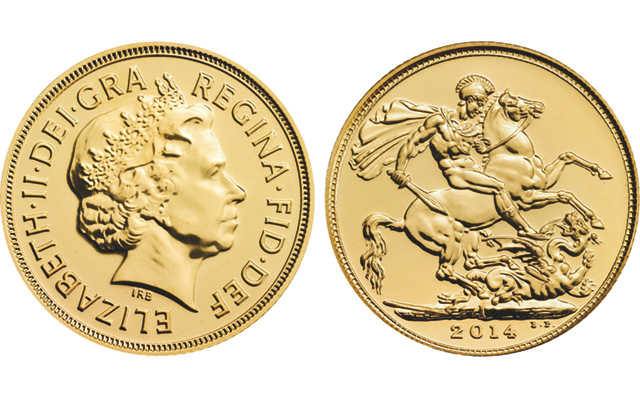 A 2014 gold sovereign struck in India by the joint venture PAMP-MMTC licensed by the Royal Mint. The small I Mint mark on the reverse identifies the Indian origin of the coin. 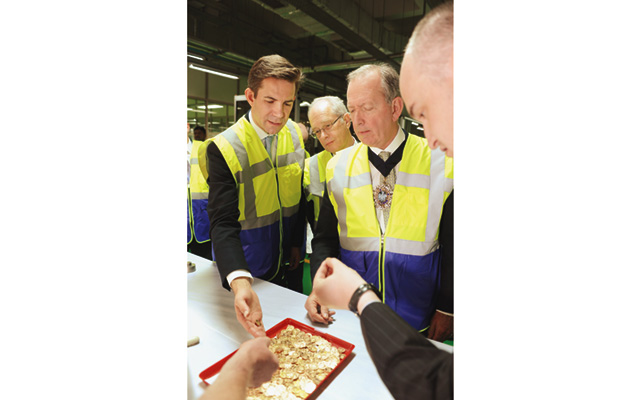 The following is a media release from the Royal Mint.

The Lord Mayor of the City of London, Alderman Allan Yarrow, has struck a special commemorative gold Sovereign during a visit to The Royal Mint’s operations in India as a lasting reminder of his first official overseas trip, the Royal Mint announced Dec. 11.

The Lord Mayor, the elected head of the City of London Corporation which supports the world-leading finance and business sector in the United Kingdom, had the opportunity to strike his own Sovereign during a tour of the Royal Mint licensee facility, operated by MMTC-PAMP, which formed part of a trade mission backed by the City of London and the UKTI.

He struck two coins, including one half-sovereign and a sovereign, during the visit. Both were dated 2014.

The Lord Mayor was presented with the Sovereign he struck to mark the occasion of his visit, together with a photograph of the occasion.

The Lord Mayor led a delegation from the UK-based finance and professional services sector on a five day visit to meet Indian Government officials, explore UK trade and investment opportunities and see some of the successful joint ventures already in operation.

The Royal Mint’s partnership with MMTC-PAMP India to strike authentic gold Sovereign commemorative coins in India for the first time in nearly a century was showcased as a demonstration of the benefits of Britain and India working together.

One of the world’s most famous coins, the Sovereign is globally recognized as a symbol of uncompromising quality standards and minting excellence.

Featuring the same classic Benedetto Pistrucci ‘St George and the Dragon’ design as the Sovereigns first struck in India in 1918, striking of the 2013 Sovereign commenced in MMTC-PAMP India’s world class facility near Delhi in February last year, and continued this year with the Sovereign 2014.

Using tools and techniques developed by the Royal Mint at their headquarters in South Wales, UK, and struck in India by MMTC-PAMP, these commemorative Sovereigns carry the special ’I‘ mint mark to indicate that they have been manufactured in India.

Residents of India had been unable to buy genuine commemorative Sovereigns since 1918, when the Royal Mint operated a branch mint in Bombay for a single year, during time which a staggering 1,300,000 Sovereigns were struck. Since then a high number of counterfeit Sovereigns have become available on the market.

The partnership with MMTC-PAMP was created to help re-establish The Royal Mint in this major market and allow the Indian public to confidently purchase authenticated Sovereigns from a British brand which is renowned for its heritage, high quality and integrity.

Mehdi Barkhodar, Chairman of MMTC-PAMP and Managing Director of PAMP SA said “The Indian consumer deserves nothing but the best; the re-emergence of the highly prized authentic Sovereign coins has been warmly welcomed by those wishing to purchase the genuine article for national festivities, weddings or other special occasions. Following the success of the iconic Sovereign, the range manufactured in India has been increased to also encompass the Half-Sovereign. We are extremely honoured the Lord Mayor of London visited our plant to witness on-going production of the Sovereign. Full of praise for the initiative shown by The Royal Mint in enabling the Indian consumer access a genuine product with the same assurance as in UK, the Lord Mayor was enthused to personally strike a Sovereign. We fully understand the heavy responsibility that goes with this privilege and will cherish his visit for years to come.”

The Lord Mayor of the City of London, Alan Yarrow, said, “Great coins like this Sovereign remind us that reliable money is at the heart of well-ordered and transparent trade, business - and human affairs. The dragon is of course good to see, as well, as it’s a famed guardian of the City, too.”

Shane Bissett, the Royal Mint’s Director of Commemorative Coin and Bullion, added, “The Sovereign is the oldest traded commemorative coin still manufactured today and is also the world’s most precisely specified gold coin. Its quality and specification is independently verified every year by the Trial of the Pyx, at over 750 years old the oldest quality control process still being used today. The commemorative coins struck in India go through this quality process in the same way as all UK coins. Our partnership with MMTC-PAMP India has enabled us to introduce genuine commemorative Sovereigns back into the Indian market, satisfying significant demand for the coin, and helping us to further expand our global offering.”