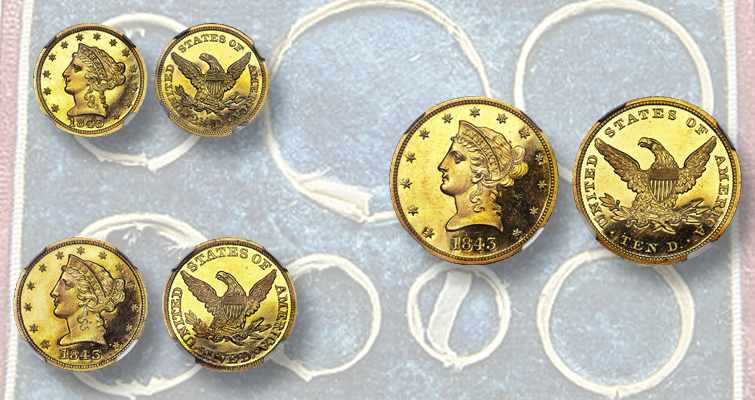 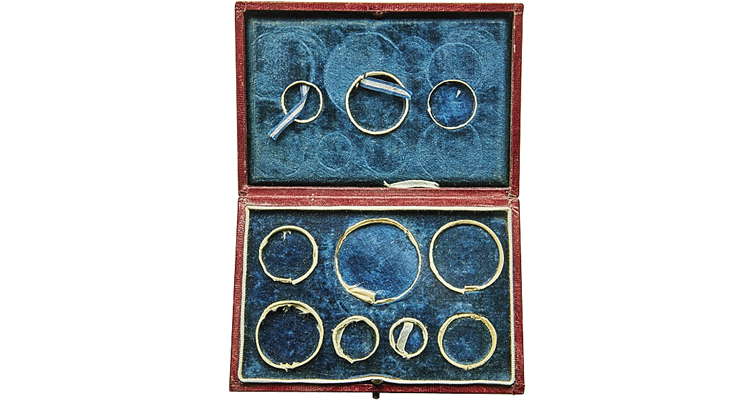 An original case for a 10-piece 1843 Proof set with a deep purple velvet-lined interior and Morocco leather-bound wood exterior where the coins once resided is offered as a separate lot. 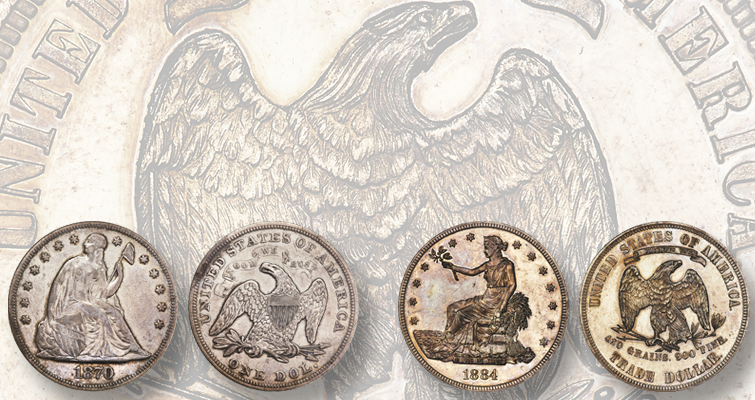 The Extremely Fine 1870-S Seated Liberty dollar, above left, realized $423,000 in a 2016 offering, while the 1884 Trade dollar graded Proof 63 last sold at a 2017 Heritage auction for the same amount. Both are stars of the ANA Platinum Night auction. 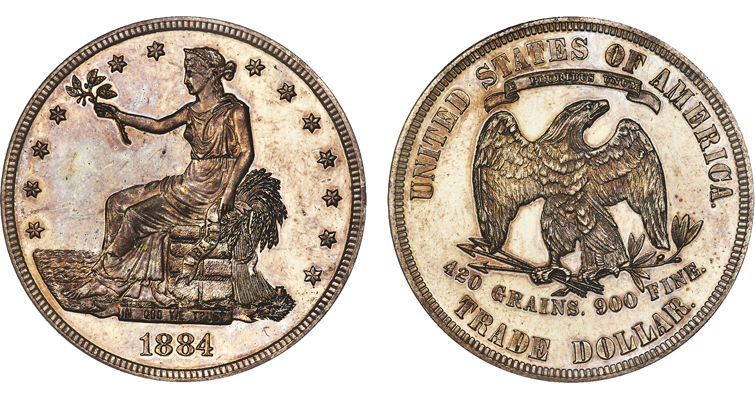 This PCGS Proof 63 1884 Trade dollar starring in the ANA Heritage Platinum Night auction “displays a sharp strike, with full head details on Liberty. The surfaces are lightly to moderately toned in silver-gray shades that allow appreciation of the reflective qualities at most angles,” the cataloger writes. 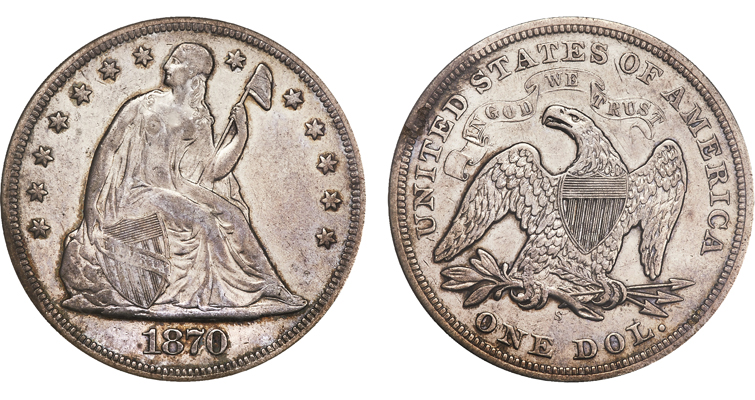 Heritage Platinum Night offerings include the Queller 1870-S Seated Liberty dollar graded Extremely Fine 40 by NGC. It is one of about 12 struck. Heritage writes: “Both sides show the normally expected number of small abrasions that a coin would receive from circulation or as a pocket piece" for several years.
Previous
Next

Heritage’s lead consignment for its Aug. 14 Platinum Night auction are 44 classic U.S. gold coins from the Joan Zieg Steinbrenner Collection of gold type coins, including a three-piece 1843 Proof gold set that will be offered as separate lots.

The 1843 Coronet $2.50 quarter eagle and $5 half eagle both are graded Proof 66 Ultra Cameo by Numismatic Guaranty Corp., while the 1843 Coronet $10 eagle is in a Proof 64 Deep Cameo Professional Coin Grading Service holder with a green Certified Acceptance Corp. sticker indicating quality for the grade.

Also offered as a separate lot is an original case for a 10-piece 1843 Proof set with a deep purple velvet-lined interior and Morocco leather-bound wood exterior where the coins once resided.

The $10 eagle is the finest-certified of six known. With three in museums, one stolen in 2007 that remains unrecovered and one that has not been offered since 1977, the coin in the Platinum Night auction is the only available example. Heritage writes, “The sharply detailed, frosty design elements contrast intensely with the deeply mirrored fields to create a delightful gold-on-black cameo effect when the coin is angled in the light,” observing, “A lint mark shows in the right obverse field, between Liberty’s hair and star 12,” along with some contact marks that limit the grade.

John Jay Pittman purchased the three gold coins in 1948 and would add the seven other denominations to complete a full 10-coin 1843 Proof set. The set and box was memorably offered at David Akers’ 1997 Part 1 auction of the John Jay Pittman Collection. The three Proof gold coins were later sold privately for a reported $937,765 by Blanchard & Co. in 2009.

Heritage’s comments on the desirability of the 1843 half eagle could be said for all three of the coins: “an extremely important opportunity for the proof gold specialist, as there is no comparable example of this rare early proof available to collectors.”

Any offering of an 1884 Trade dollar is significant, and Heritage will offer one graded PCGS Proof 63 that last sold at its Florida United Numismatists auction in January 2017 for $423,000. Just 10 were struck and all are accounted for today. The second finest known, graded Proof 66 by NGC, sold for $1,140,000 earlier this year, showing sustained demand. At that offering Heritage noted, “Curiously, the 1884 is something of a sleeper among the great rarities of the U.S. series, because of its undeserved reputation as a clandestine issue.”

Traditionally the Proof 1884 and 1885 Trade dollars have been considered as delicacies produced by the U.S. Mint for collectors, since Philadelphia Mint officials denied that Trade dollars were issued in 1884, but recent research has questioned that long-held tenet.

On the subject offering, Heritage writes, “The present PR63 PCGS example displays a sharp strike, with full head details on Liberty. The surfaces are lightly to moderately toned in silver-gray shades that allow appreciation of the reflective qualities at most angles,” noting some scattered hairlines that account for the grade and a “small toning spot in the obverse field below Liberty’s outstretched arm, as well as a lint mark (as struck) in the field after the date, are worthwhile pedigree markers.”

Another well-known and well-traveled dollar is the Queller 1870-S Seated Liberty dollar graded Extremely Fine 40 by NGC. It is one of perhaps a dozen struck — of which Heritage has traced nine — and the issue was possibly struck as a memento celebrating the laying of the San Francisco Mint building’s cornerstone on May 25, 1870. All but one is circulated, lending credibility to that theory.

This one has an active recent auction history, including at least eight visits to the auction block in the past two decades.

Heritage writes, “Both sides show the normally expected number of small abrasions that a coin would receive from circulation or as a pocket piece; the brightness is also consistent with several years’ residence in a pocket.” Its most expensive offering was at Heritage’s April 2008 Central States Numismatic Society auction where it brought $805,000, and it would sell again in 2016 for $423,000. 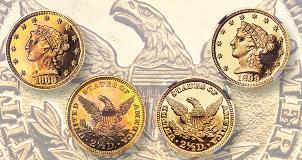 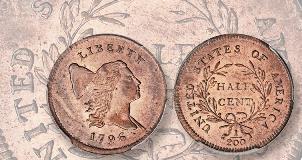 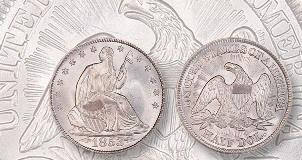