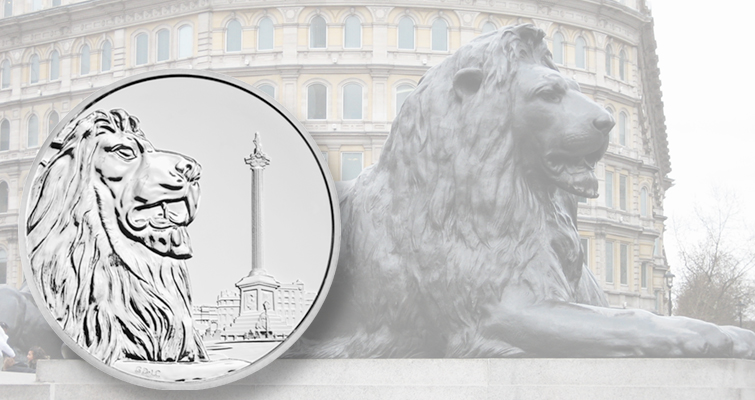 To create designs for the third coin in the Royal Mint’s series of silver £100 coins offered at face value, designers Glyn Davies and Laura Clancy acted like tourists.

Specifically, the designers visited Trafalgar Square (the subject of the new coin) so they could watch visitors to the central London site, capturing sketches and images to gain inspiration for their joint design.

Both artists cooperated to design the reverse of the new coin, showing one of Edwin Landseer’s lions in the foreground with Nelson’s Column in distance, conveying a sense of space and scale. According to the Royal Mint, the design is intended to convey a visitor’s eye “snapshot” view of the world-famous landmark.

The pair modeled their design in clay rather than traditional plaster, “creating a more fluid, sketch-like appearance,” according to the Royal Mint. According to a statement from the Royal Mint, the designers “wanted to achieve something quite different to things that had been done before. We modelled in clay rather than the more traditional plaster. This softer material allowed us to create a more fluid model, more like a sketch than a photo, but in 3D. At the Royal Mint we hand-work all our master-tools, but, for these tools, we added texture, something that would add to the sense of mood and the feeling of weather.”

The Trafalgar Square 2-ounce .999 fine silver coin “is not designed to be spent and will not be entering general circulation,” the Royal Mint said in its press release.

The coin is part of “a special collection created in a Brilliant Uncirculated ‘mint condition’ finish designed to be a limited edition collectable, to highlight the craftsmanship of the Royal Mint’s designers, engravers and toolmakers,” according to the Royal Mint.

The coin follows earlier releases featuring the Elizabeth Tower housing Big Ben in 2015, which sold out its 50,000-coin mintage within a few weeks of its launch. The second coin in the series, honoring Buckingham Palace, did not sell out its mintage of 50,000 pieces, and the mintage limit for the Trafalgar Square coin has been reduced to 45,000 pieces.

Laura Clancy studied three-dimensional crafts at the University of Brighton and previously taught art and metalwork. Her individual projects for the Royal Mint include a coin to commemorate the 90th anniversary of the First World War and the Remembrance Day 2014 Alderney £5 coin.

Glyn Davies worked as an animator before gaining a master’s degree in Post production at Bournemouth University. He worked as a set designer, video editor and motion graphic designer before joining the Royal Mint, where his projects have included a medal for the Zoological Society and the Remembrance Day 2015 Alderney £5 coin. 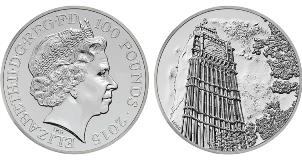 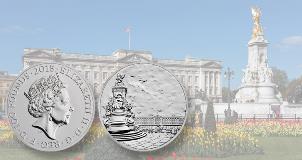