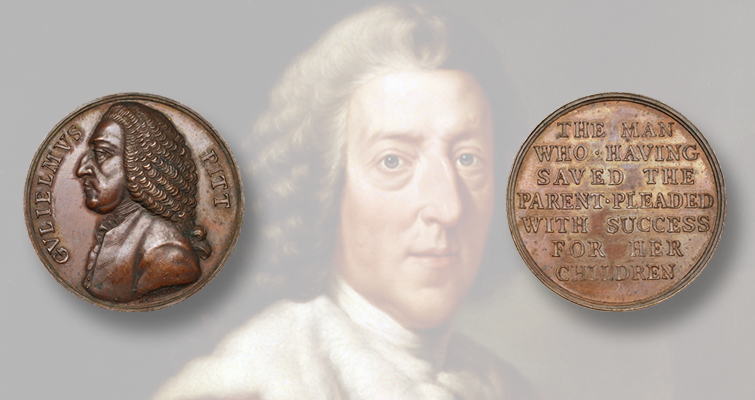 A 1766 bronze medal honoring William Pitt, who supported American colonists during the Stamp Act debate, is part of a Dec. 2 auction in London.

William Pitt, the elder, as any good American student of history might tell you, was a Englishman popular in America because he supported the American fight against taxation without representation.

More than 255 years after his Jan. 14, 1766, speech against the Stamp Act, a copper medal honoring him is offered at auction.

The medal is by no means rare, but its existence as an object of interest in both British and American numismatic circles is notable.

The Repeal of the Stamp Act medal is part of Dix Noonan Webb’s Dec. 1 and 2 auction, offered the second day of the sale.

Designed by Thomas Pingo, a famous name in British numismatics, it shows a bust of Pitt on the obverse, facing left, his given name in Latin (GVLIELMVS).

The reverse carries the famous legend in seven lines reading: THE MAN WHO HAVING SAVED THE PARENT PLEADED WITH SUCCESS FOR HER CHILDREN.

The legend is a reference, of course, to his service to the crown in Parliament and other roles, as well as, particularly, his coming to the defense of the colonies.

Defense of the colonies

When C. Wyllys Betts wrote American Colonial History Illustrated by Contemporary Medals in 1894 (where this medal is cataloged as Betts 516), he wrote that “his argument in 1765 and 1766 against the Stamp Act, and the right of England to tax the colonies, endeared him to America, and his famous speech in 1775 on the America war and the Boston Port bill, and that against employing Indians to fight the American Colonies in 1777, are too well known to Americans to need comment.”

While likely true more than 125 years ago, today we might need a search-engine assisted refresher course. Lacking space, we avoid further comment.

The medal measures 40 millimeters in diameter, about the size of a American Eagle silver dollar, or of the British “crown” coin that gives other coins of that size their name.

Cataloged by Christopher Eimer as Eimer 713 in British Historical Medals and Their Values, it is a sort of international crossover item.

The firm grades the medal About Extremely Fine and assigned an estimate of £100 to £120 ($135 to $162).
Consigned: 1766 bronze William Pitt medal
Condition: About Extremely Fine
Auction Location: London
Auction Dates: Dec. 1 and 2, 2021
Details: Common copper medal is of interest to American and British collectors alike 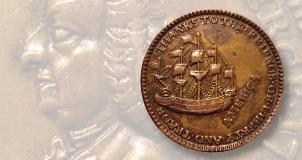 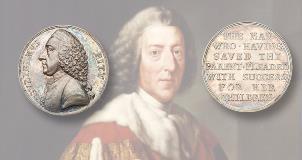