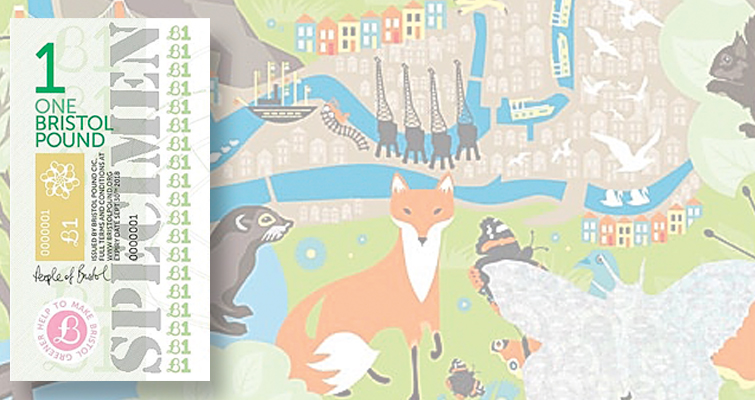 Not your usual paper money design. Communities in Great Britain are issuing colorful scrip notes that can be used for purchases at local businesses. 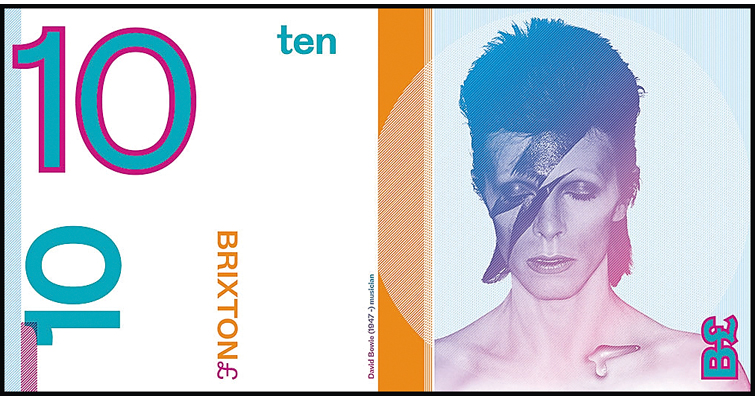 Musician David Bowie appears on the back of the £10 scrip note in the Brixton Pound program. The singer’s family once lived in the community. 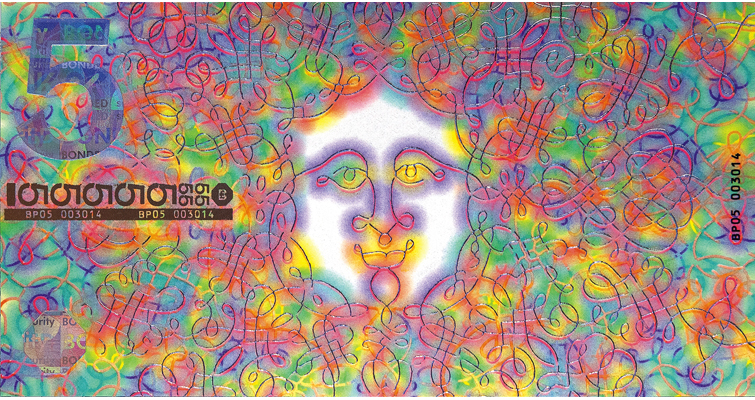 A special Brixton £5 commemorative note was designed by prize-winning artist Jeremy Deller. The design itself can be described as psychedelic, with a sketched face surrounded by a variety of lined patterns over a multicolored background. 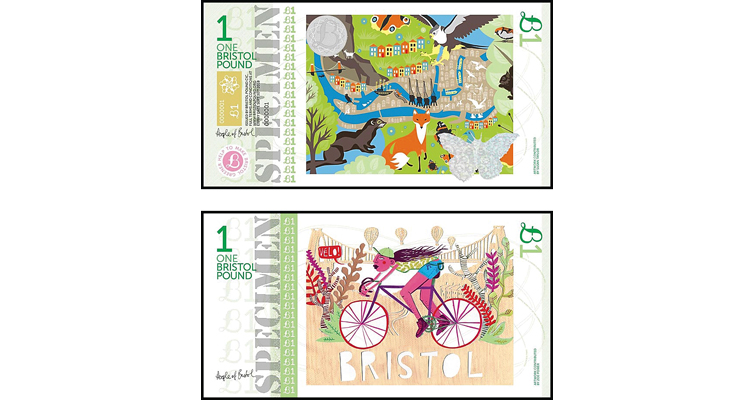 The theme of Bristol’s 2015 £1 note is “Bristol Green Capital” and the note displays whimsical drawings of local wildlife, shown at top, and a woman cyclist, bottom. The private scrip notes are accepted at numerous local businesses. 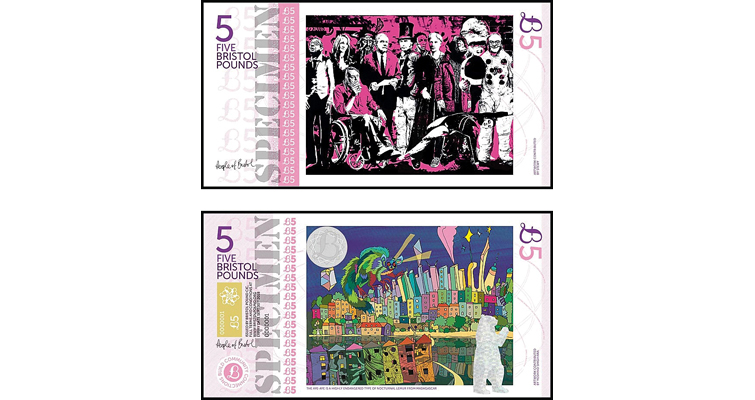 The face of Bristol’s £5 scrip note shows a nocturnal lemur from Madagascar exploring the city, while the back has famous people connected to Bristol. 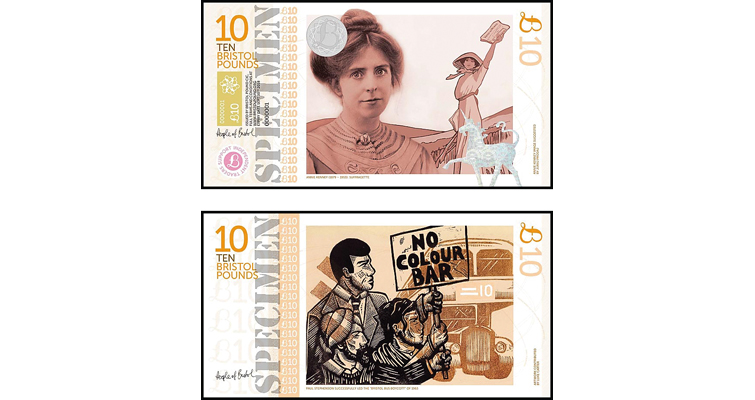 The Bristol £10 note’s theme is “Community and Diversity” and pays tribute to the woman’s suffrage movement and Bristol bus boycott of 1963. 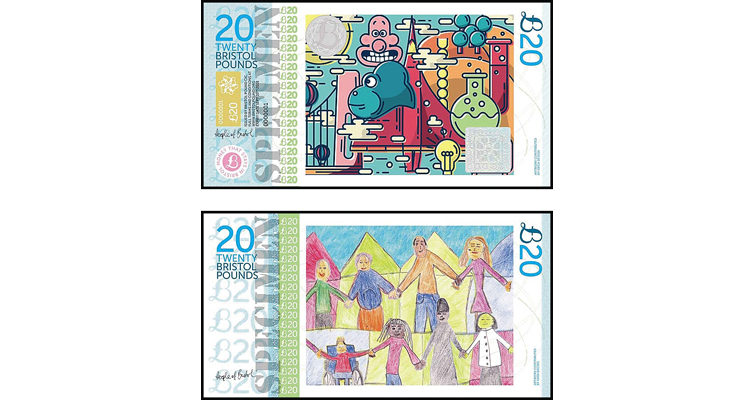 The face of Bristol’s £20 note, shown at left, is designed as a fun representation of the area as a forward thinking city.

When collectors think of paper money scrip, they will usually associate it with adjectives such as dull, monochromatic, unattractive but interesting, and similar terms. Even some of the more popular recent scrip issues such as Disney Dollars, while colorful, are not meant to evoke high artistry.

A reader would therefore be excused if he did a double take when on the front page of the fashion and style section of the Sunday Aug. 9 New York Times, one of the three lead stories was about local currency scrip.

The story focused on the Brixton district of London and the nearby city of Bristol, stating that with electronic payment systems now growing, cash is becoming an “artisanal object.” Not only that, but according to the Times, the term “cash only” has transcended tax evasion and now represents “hipster entrepreneurialism.” What exactly have these cities done?

It is not a new concept in Brixton, which is now celebrating the fifth anniversary of its first local currency issue with the release of a special Brixton £5 commemorative note designed by prize-winning artist Jeremy Deller. The design itself can be described as psychedelic with a face surrounded by a variety of lined patterns over a multicolored background.

Charlie Waterhouse, founder of the creative agency, This Ain’t Rock’n’Roll, and responsible for the designs of the Brixton currency, called the new issue “the most amazing currency notes ever produced ... beautiful and mysterious; spiritual and politicising.”

And in what must be one of the most unique sales pitches ever conceived, he added that the note “provides the most compelling response to the rot that emanates from the Square Mile that I’ve seen since we were all told we had to live under the yoke of Austerity.”

Each note has its own serial number. They are sold on the Brixton Pound website, https://brixtonpound.org.

The Brixton Pound was launched in September 2009 with the goal of supporting local businesses and encouraging local trade and production. The £1, £5, £10, and £20 notes are intended to circulate alongside, not replace the U.K. pound. The local scrip is accepted by about 250 local merchants. Since the scrip notes stay in the community and circulate only there, they are said to provide local traders and customers the chance to get together to support each other. According to the website, when they are spent with a local independent business, circulation within the local economy is up to three times longer than when spent with national chains.

All Brixton notes feature local “heroes.” First edition Brixton notes were used between 2009 and 2011 and had designs making pointed political statements. The second issue is in use since 2011 and is more avant-garde. Among the locals portrayed are Luol Deng, a basketball player for the Great Britain national team as well as the Chicago Bulls and Miami Heat, on the £5 note; and on the £10 note, David Bowie, who lived in Brixton with his family from 1947 to 1953.

The Bristol Pound made its debut in 2012 and is now accepted by more than 800 businesses. According to The Guardian newspaper, £1 million in Bristol scrip has been issued and about £700,000 of that is still in circulation. The program’s mission also is to support the local economy, and the scrip can even be used to pay local taxes.

Each Bristol Pound is backed pound for pound by sterling deposits (except when it has been sold outside the area to collectors, a caveat that also applies to the Brixton issues). The first issue of £1, £5, £10, and £20 Bristol notes will be recalled on Sept. 15 and will be demonetized at the end of the year. Until then, locals can exchange them for the new series. They are also available for sale to collectors.

A design competition was open to locals for the new 2015 series, in which each denomination is dedicated to a particular theme.

The theme of the 2015 £1 note is “Bristol Green Capital” and the note displays whimsical drawings of local wildlife and a woman cyclist. The face of the £5 scrip note shows a nocturnal lemur from Madagascar exploring the city, while the back has famous people connected to Bristol, among them the author J.K. Rowling. The £10 note’s theme is “Community and Diversity” and pays tribute to the woman’s suffrage movement and Bristol bus boycott of 1963. Finally, the face of the £20 note is designed as a fun representation of the area as a forward thinking city, and the back, the work of a 6-year-old, shows the diversity of the community as residents stand together holding hands.

Each note has a hologram related to its theme.

More information and an online shop is located at http://bristolpound.org.