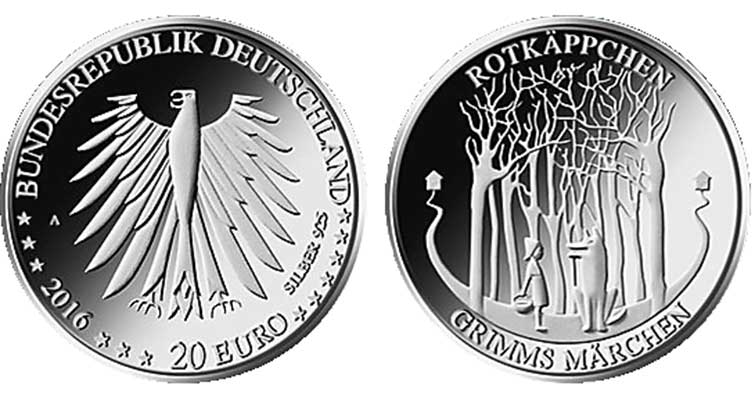 Germany’s first commemorative silver €20 coin, due for release in February 2016, will show Red Riding Hood meeting the Big Bad Wolf in the forest.

The Red Riding Hood coin is the fifth in a series of six honoring the Grimms Fairy Tales and is due for release in February 2016.

According to a translation of the Ministry of Finance press release, “This adaptation should lead to a sustainable strengthening and revival of the collector market. It takes into account the desire of many collectors also for [precious metal] coins.”

The obverse shows the eagle emblem of the Federal Republic of Germany and the denomination, the date of issue and 12 stars of the European Union.

The reverse shows a typical scene from this fairy tale, Little Red Riding Hood meeting the Big Bad Wolf while on her way to her grandmother’s house. Berlin artist Elena Gerber designed the reverse, which shows a dark forest with what could be assumed to be trees as vertical intertwined structures representing the unknown, according to a translation of the Ministry of Finance announcement.

The folk tale dates back hundreds of years, but the story known as Rotkäppchen was included in the first edition of the Brothers Grimm’s 1812 collection Kinder- und Hausmärchen (“Children’s and Household Tales”).

The coin will be issued in .925 fine silver in both Uncirculated and Proof versions, each weighing 18 grams and measuring 32.5 millimeters in diameter.

The BU versions will be sold at face value, and the Proof version will have a premium price, which will be determined closer to the release date.

Want to read about other German collector coins? Coin World has the stories!