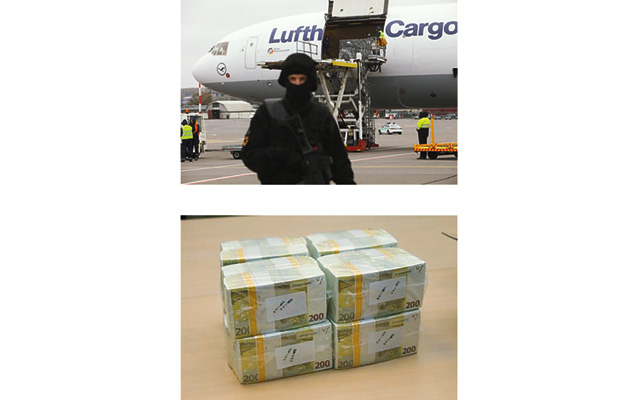 The euros, delivered by plane from Germany to Lithuania, were protected by the Lithuanian Police Anti-terrorist Operations Unit Aras. Bundles of euro bank notes borrowed from Germany were safely delivered to the Bank of Lithuania.

Images courtesy of the Bank of Lithuania, photo by Dainius Labutis.

The Bank of Lithuania has begun distribution of euro ban knotes to the nation’s commercial banks for placement into circulation early in 2015, according to a Nov. 13, 2014, news release from the bank.

The Bank of Lithuania is borrowing the euro bank notes from Germany’s Central Bank — Bundesbank. According to the agreement, the bank notes will be returned once Lithuanian notes are printed at a European Union-certified printing house.

The entire amount of euro bank notes for Lithuania — 132 million bank notes weighing 114 tons — was safely delivered to the Bank of Lithuania’s vaults.

“Historically this is the largest shipment of cash to Lithuania. The operation was completed safely and successfully. We appreciate the particularly successful cooperation with the partners who participated in the operation,” says Vitas Vasiliauskas, Chairman of the Board of the Bank of Lithuania.

The bank notes were shipped to Lithuania from Germany in three airline flights. Two shipments were delivered to the Bank of Lithuania’s vaults in Vilnius, and one in Kaunas.

In escorting the notes to the vaults, the police department, Lithuanian Police Anti-terrorist Operations Unit Aras, traffic police, territorial police and airport security all participated; helicopters were borrowed from the State Border Guard Service for the operation.

The operation was carried out in accordance with particularly strict security requirements. The public was informed of the bank note delivery ahead of time.

“Such operations are very carefully planned. Our officers participated not only as security for the column transporting the banknotes. We also used snipers, who acted as security from the buildings and helicopters. An additional group of mobile officers was also prepared to react in case of an incident,” reported Viktoras Grabauskas, Chief of the  Lithuanian Police Anti-terrorist Operations Unit Aras, revealing some details from the operation.

A video of the arrival, transportation and delivery of the notes is available at the Bank of Lithuania website. The narration is in Lithuanianon for the planned euro bank notes news release, but the images are enough to tell the story.