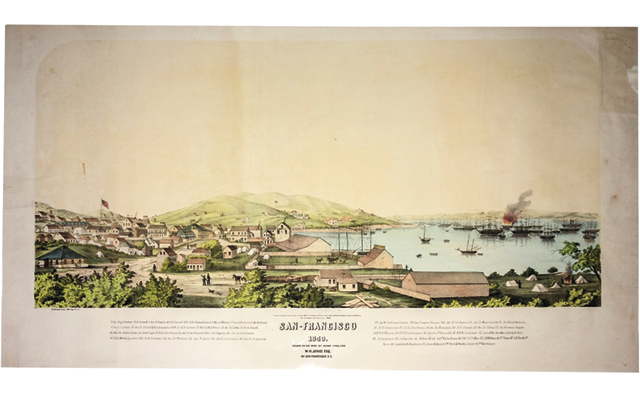 This 1849 lithograph of San Francisco, Calif., by Grafton Tyler Brown, sold for $2,500 in the Sept. 13 auction by Holabird Western Americana Collections.

An 1849 lithograph of a then sparsely populated San Francisco harbor sold for $2,500 during the Sept. 13 to 14 public auction by Holabird’s Western Americana Collections in Reno, Nev.

Prices stated here do not include the buyer’s fee, which differs by type of item being sold and method of payment.

The lithograph was made by Grafton Tyler Brown, who the catalog describes as “the (or at least one of the) most important West Coast lithographers during the 1800s. He was a self-trained artist and pioneer lithographer. He took on the largest San Francisco lithographic firms in the 1860s and 1870s and equaled them in design.”

Brown also designed a stock certificate for 50 shares in the Newark Silver Mining Co. An example for owner H.A. Sweet, dated Dec. 22, 1877, sold for $100 in the auction.

It is “a great example of how G.T. Brown creates a picture without pictures” with “fancy letters, etched circles,” according to the catalog. Brown designed the certificate in 1872.

No grade is given for this piece in the catalog.

Brown is perhaps one of the best known in a slender category of African-American lithographers. His life is chronicled in a new book, San Francisco Lithographer – African American Artist Grafton Tyler Brown, by Robert J. Chandler, retired historian for Wells Fargo Bank.

For more information, visit the Holabird website or telephone the firm at 775-851-1959.