Liberty Dollars may be subject to seizure 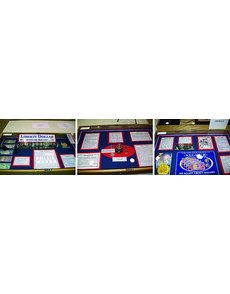 Michigan collector James Zylstra earned a third-place award in the medals category with his Liberty Dollar exhibit at the spring 2011 Central States Numismatic Society convention, a month after the Liberty Dollars’ creator was convicted in federal court of counterfeiting and other charges. Liberty Dollars may be subject to seizure.

Liberty Dollars held by collectors may be subject to seizure as contraband by federal law enforcement, officials with the U.S. Attorney’s Office and Secret Service said Aug. 24.

Statements by officials for those two federal law enforcement agencies seem to reverse the position taken in comments released from the United States Attorney’s Office in Charlotte, N.C., and published in Coin World in April, that mere possession of Liberty Dollars did not constitute a violation of any federal statute.
That position has apparently changed, although officials of the U.S. Secret Service — which would be the federal agency likely charged with executing any possible seizures — would not provide any definitive comments concerning under what circumstances Liberty Dollars would be seized.

The revised stance is tied to the Liberty Dollar being determined in a federal court to violate federal counterfeiting statutes. Liberty Dollars, metallic medallic pieces, were privately promoted as a form of currency that could be used in commerce as an alternative to Federal Reserve notes.

Jill Rose, chief of the criminal division for the U.S. Attorney’s Office in Charlotte, N.C., told Coin World Aug. 24 that the Liberty Dollar medallions are confiscable as contraband regardless if they are being exhibited for educational purposes only.

Rose served as lead prosecutor in the Bernard von NotHaus case. Von NotHaus, creator of the Liberty Dollars, was convicted in federal court in March on multiple charges involving the alternative currency.
Rose said because von NotHaus’ conviction included violations of Sections 485 and 486 of Title 18 of the United States Code, the Liberty Dollar medallions were determined to be counterfeits, contraband and subject to seizure.

The Liberty Dollar represented “a pyramid scheme imbedded with fraud” that had nothing to do with barter or trade, according to Rose.

“Barter is an equal and knowing exchange,” which the Liberty Dollar was proven in court not to be, Rose said.

Also on Aug. 24, in addition to speaking with Rose, Coin World talked separately with Glen Kessler, assistant special agent in charge in North Carolina for the U.S. Secret Service.

Kessler could not provide a blanket position the Secret Service would take toward those owning Liberty Dollars, whether one piece or significantly more.

He said if a Secret Service agent witnessed something considered to be contraband, such as Liberty Dollars, they would be duty-bound to confiscate it.

Kessler subsequently conferred with his Secret Service superiors as to the agency’s specific position on the Liberty Dollar and potential confiscation.

Kessler informed Coin World the morning of Aug. 25 that because the publication has a worldwide audience, he had to defer additional comments to the U.S. Secret Service Office of Public Affairs.
George Ogilvie, the public affairs officer for the U.S. Secret Service in Washington, D.C., said Aug. 25 the bureau had no comment on Liberty Dollars and indicated that Coin World would have to call back in a few weeks.

Asked what would be different in a few weeks as to under what circumstances seizure of Liberty Dollars would be enforced, Ogilvie responded, “We don’t have anything to say.”

Soon after von NotHaus’ March 18 conviction, Coin World obtained and published comments from the U.S. Attorney’s Office in Charlotte stating that while mere possession of Liberty Dollar medallions was not a violation of federal statutes, actual use or intent to use them in the manner for which von NotHaus was convicted would be considered a violation.

Millions of Liberty Dollars in copper, silver and gold versions are in the hands of collectors and supporters of the Liberty Dollar medallions who have been concerned the medallions could be confiscated by federal authorities.

And that possibility is now apparently real.

The reversal of opinion surfaced after a Michigan collector sought to display his award-winning Liberty Dollar exhibit at the American Numismatic Association World’s Fair of Money in Rosemont, Ill. Aug. 16 to 20. ANA officials denied the collector the opportunity amid fears the exhibit’s contents would be seized off the convention bourse floor by federal authorities. The collector had exhibited the collection in various venues previously.

The collector, James Zylstra, had originally hoped his 11th time since 2009 in setting up the competitive numismatic exhibit of medallions would be during the ANA World’s Fair of Money in Rosemont. Leading up to the convention, as late as immediately prior to the Aug. 16 official opening, ANA exhibit judges and ANA legal counsel A. Ronald Sirna Jr. sought a written declaration from the Department of Justice that Liberty Dollars could be exhibited for educational purposes without fear of confiscation. No such declaration was forthcoming.

As a result of not receiving a written declaration on federal agency letterhead permitting their display, ANA officials denied Zylstra the opportunity to exhibit the Liberty Dollars at the ANA convention over concerns the medallic contents of the exhibit could be seized.

Zylstra told Coin World he was disappointed by the ANA’s decision. Although Zylstra said he is concerned with what action federal officials might take involving his collection of Liberty Dollars, he said he is planning to display his award-winning exhibit of Liberty Dollars at the fall Michigan State Numismatic Society Convention in November in Dearborn where he has exhibited before and won recognition for the Liberty Dollars exhibit.

But Zylstra may need the same written declaration as the ANA sought before he can exhibit the Liberty Dollars there, as Sirna is also legal counsel for MSNS.

Sirna could not be reached Aug. 25 for additional comment.

The 2011 CSNS convention was held a month after von NotHaus’ conviction and the determination of the Liberty Dollar’s status.

Contacted Aug. 25 by Coin World concerning the issues of displaying Liberty Dollars, CSNS legal counsel Steven Bieda said he would bring both the subject of permitting exhibits of Liberty Dollars and also of permitting dealers to sell the pieces on the CSNS convention bourse floor before CSNS officials for review and recommendations, including a review of exhibit bylaws to protect the organizations, as both issues will be recurring topics.

“I am not the exhibits chair, nor have I been asked for an opinion on displaying ‘liberty dollars’ from our exhibits chair,” said Bieda, who studied and enjoyed Zylstra’s exhibit at the CSNS convention. “However, if I were asked, I would not have any problem allowing such an exhibit, especially as one of the stated goals of the exhibits is to foster numismatic knowledge and education.”

Bieda said he has not seen any indication from federal authorities that they plan a concerted move to confiscate privately held Liberty Dollars.

“I note that the pieces are being sold and traded on on-line auction sites such as eBay, and have personally seen these pieces sold at local coin shows and coin shops, all without any apparent legal consequence,” Bieda said. “Thus, it would be my recommendation that should an exhibitor want to place an exhibit involving these pieces, and assuming that all the other relevant exhibitor criteria is satisfied, that they be allowed to do so.

“In any event, the hosting numismatic association would not be responsible should the federal government or any other legal authority take legal action or move to confiscate that or any other exhibit. That risk is entirely on the exhibitor.”

Zylstra earned a third-place award in the medals category for his Liberty Dollar exhibit at the 2011 CSNS convention. Zylstra has also won awards for the exhibit displayed at a Florida United Numismatists convention, and earned a first place when the exhibit was placed on display in Fort Worth, Texas, in March 2010 during the ANA National Money Show.

As Bieda noted, Liberty Dollars are actively traded in the collector marketplace.

Coin World has not been able to determine whether ANA officials or officials at other conventions and shows would ban the sale of Liberty Dollars on the bourse floor.

As of Aug. 25, no movement by federal officials has been seen toward the confiscation of Liberty Dollars offered for sale online, including through auction sites such as eBay.

Zylstra first learned of Liberty Dollars in November 2008 when a business card was placed on the windshield of his car in a shopping center parking lot while he was wintering in Clearwater, Fla.

Zylstra said he was intrigued by the premise of Liberty Dollars, but wanted to create a balanced exhibit offering different points of view.

Zylstra’s “Bonafide or Bogus?” exhibit comprises approximately 20 Liberty Dollar medallions in copper, silver and gold versions in different diameters, weights and face values, as representative examples, although many more multiple designs and varieties were produced than are represented in the exhibit.

Also included in the exhibit were full-color paper warehouse receipts that were backed by precious metals, along with Liberty Dollar promotional materials and historical information.

Following a six-day trial, on March 18, a federal jury in Statesville, N.C., convicted von NotHaus — founder of NORFED (National Organization for the Repeal of the Federal Reserve and the Internal Revenue Code), its subsequent Liberty Services, and monetary architect of the Liberty Dollar — of conspiracy against the United States; making coins resembling and similar to U.S. coins; of issuing, passing, selling and possessing Liberty Dollar coins; and of issuing and passing Liberty Dollar coins intended for use as current money.

NORFED and Liberty Services promoted Liberty Dollars as an alternative currency for use in commerce, and reported that it’s successfully used in transactions in various locales. Liberty Dollars were sometimes touted by the program’s adherents as “private voluntary barter currency.”

On April 12, Ron Whitney, executive director for the International Reciprocal Trade Association (www.irta.com), based in Portsmouth, Va., issued a statement denouncing the Liberty Dollars as not being part of the modern trade and barter industry.

The extensive statement emphasized the outcome of the von NotHaus trial did not set a federal government precedent against private barter currencies.

“Mr. von NotHaus was convicted of the charges of counterfeiting and making and selling currency, barter had nothing to do with the case,” Whitney said. “The modern trade and barter industry was recognized by the U.S. government as a legal alternative form of commerce by the Tax Equity and Fiscal Responsibility Act (TEFRA), passed in 1982 whereby barter exchanges were deemed third party record keepers and required to comply with IRS 1099B reporting laws.”

“The Liberty Dollar’s verdict is completely separate from the legally recognized modern trade and barter industry and in our view it does not represent an effort on the government’s part to declare valid TEFRA compliant barter transactions as illegal activity,” Whitney said.

The complete statement can be accessed online at the IRTA website. ¦