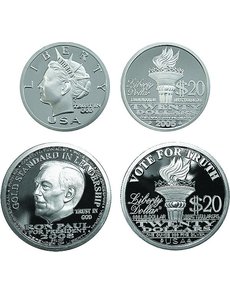 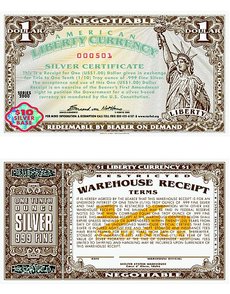 The paper certificates or warehouse receipts that were backed by silver or gold were not part of the federal government’s prosecution of Liberty Dollar founder Bernard von NotHaus, below, although examples were seized by federal authorities in 2007. Coin World images 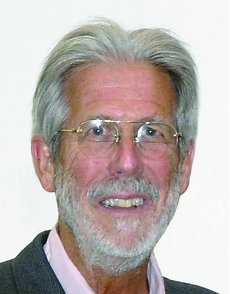 Collectors may legally buy, sell and own all forms of Liberty Dollars as long as they do not attempt to pass them as current money, a federal official said April 12.

Some collectors had voiced concern over the metallic and paper Liberty Dollars in their personal collections following the March 18 conviction of Liberty Dollar founder Bernard von NotHaus on counterfeiting and other federal charges.

A representative for the U.S. Attorney’s Office in Charlotte, N.C., April 12 assured collectors that the copper, gold, silver and platinum Liberty Dollars and paper warehouse receipts formerly backed by silver are legal to buy, sell and trade as long as they are not passed as current U.S. money.

The U.S. Attorney’s Office representative said federal officials will not seek to confiscate any Liberty Dollars nor seek prosecution of any individuals who own them unless they violate the federal statutes for which von NotHaus was convicted in March and is awaiting sentencing while free on bond.

“... mere possession of Liberty Dollars is not a violation,” according to the U.S. Attorney’s Office representative. “However, if the holder of the Liberty Dollar coin attempts to put such coin into circulation, or passes and utters the coin, or attempts to use the coin in commerce, barter or trade, then they have violated the law.”

Hundreds of examples of the various Liberty Dollar items created by the Liberty Dollar’s monetary architect, Bernard von NotHaus, are offered for sale at any given time by private sellers online over the eBay auction site and elsewhere.

Paper warehouse receipts were never part of the government’s prosecution nor was electronic currency, even though certificates were among items seized by federal authorities in 2007.

Liberty Dollars have been issued since 1998 in different sizes and metals and bearing different designs. One of the last designs released depicts 2008 presidential candidate Rep. Ron Paul, R-Texas.

A comprehensive historical and illustrative account of the Liberty Dollar can be found online at http://sites.google.com/site/libertydollarencyclopedia/. The site is maintained by collector Ron Goodger, who also sells pieces via eBay (http://stores.shop.ebay.com/Rons-NORFED-Silver-Libertys).

Von NotHaus, who in recent years has referred to the Liberty Dollar as a “private voluntary barter currency,” was convicted March 18 following a jury trial in U.S. District Court for the Western District of North Carolina in Statesville of fabricating, possessing and marketing his own coins to compete with U.S. currency.

He is also seeking the return of more than $7 million in gold, silver and copper Liberty Dollars, stored silver backing warehouse receipts and other property seized in FBI raids of locations in Couer d’Alene, Idaho; Asheville, N.C.; and Evansville, Ind., where Liberty Dollar operations were headquartered. Among the claims for seeking acquittal is that the federal government’s evidence was insufficient to support the verdict that the Liberty Dollars were counterfeits of United States coins “and the criminal intent element of the crimes charged.”

Von NotHaus remains free on bond pending sentencing. He faces up to 15 years in federal prison and a fine of up to $250,000 on the count related to distributing the coins for use as money, and a sentence of five years and fines of $250,000 on counts related to making the coins and the conspiracy charge.

On April 4, U.S. District Court Judge Richard Voorhees resumed the March 18 portion of the trial devoted to the forfeiture of the seized property to determine whether the government should retain the property, or if there are “innocent” third parties who claim ownership rights.

As of April 14, Judge Voorhees had not issued a ruling.

Von NotHaus created the Liberty Dollar in 1998 with the creation of NORFED (National Organization for the Repeal of the Federal Reserve and the Internal Revenue Code).

Von NotHaus developed the Liberty Dollar as an alternative “inflation-proof” currency to the American dollar, which he claimed has devalued since the Federal Reserve was established in 1913.

Von NotHaus dissolved the nonprofit entity in early December 2006, but quickly reinvented the promotion of the private currency under the name Liberty Services, doing business as Liberty Dollar.

The FBI began investigating the Liberty Dollar operations beginning in 2005 in Asheville, N.C., leading up to the November 2007 raids by the FBI and Secret Service.

Von NotHaus, an independent distributor known as a regional currency officer, and two former Liberty Services employees were indicted in May 2009, and arrested the following month.

Bledsoe and Moseley are out on bond, while Innes, a Canadian national, has been in federal custody in North Carolina since his June 2, 2009, arrest.