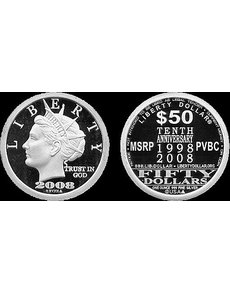 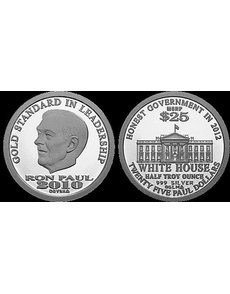 Presidential hopeful Ron Paul’s portrait was introduced on the obverse of a series of Liberty Dollars introduced in 2008. The series is among those banned for sale on eBay. 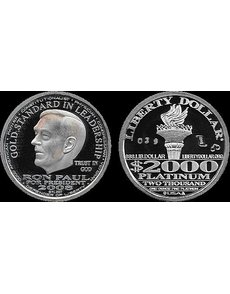 The highest face value piece removed from listing on eBay by Gillie was this 1-ounce $2,000 Ron Paul piece composed of platinum.

At the request of the U.S. Secret Service, eBay has begun purging the online auction site of listings offering for sale Liberty Dollar medallions in gold, silver, platinum and copper.

Officials at eBay indicate the systematic removal beginning Nov. 29 of the listings is intended to conform with its policy implemented Feb. 20 banning the listing of counterfeits and replicas on eBay.com.

In emails sent by eBay to sellers whose listings for Liberty Dollars were canceled, officials at the online auction site expressed their regrets for having to take the action.

“The United States Secret Service has requested the removal of all Norfed Liberty dollars on the eBay site as counterfeits. ...

“Please do not relist this item(s).

“We appreciate that you chose to list this coin on our site and understand there was no ill intent on your part. Your listing fees have been credited to your account.”

Contacted by Coin World, eBay spokesman Ryan Moore offered the following comment: “The listings for Norfed Liberty Dollars have been removed as they have been deemed counterfeit by the United States Secret Service. Counterfeits are illegal and not welcome on any of eBay’s sites.”

NORFED is more formally known as the National Organization for the Repeal of the Federal Reserve Act and the Internal Revenue Code. The group issued Liberty Dollar medallions as an alternative to Federal Reserve notes, and advocated their commercial use.

Dave Gillie, who began buying and selling Liberty Dollars in 2001 and later became a regional currency officer for NORFED, said Dec. 5 that he had eight of his listings for Liberty Dollars canceled on Nov. 29.

The dealer was perplexed by the government’s characterization of Liberty Dollars as counterfeits. Gillie said in a Dec. 5 email to Coin World that out of respect for eBay’s “coerced” decision he will not list Liberty Dollars for sale at the website until “they change their policy again.”

The Liberty Dollar, introduced in 1998 by its monetary architect, Bernard von NotHaus, was deemed counterfeit during a March 2011 federal trial in North Carolina. Von NotHaus was convicted on four counts involving the production and distribution of the Liberty Dollars. Von NotHaus has yet to be sentenced.

Von NotHaus billed Liberty Dollars as an alternative form of money for those who do not want to use Federal Reserve notes. Federal officials claimed the metallic Liberty Dollars violated federal counterfeiting laws.

Coin World contacted the U.S. Secret Service’s Office of Public Affairs in Washington, D.C., as well as the U.S. Attorney’s Office in Charlotte, N.C., for specific comments regarding the issues of ownership and sale of Liberty Dollars still in collector hands. As of Dec. 7, no responses had been given to Coin World.

In 2006, the U.S. Mint issued a press release stating that prosecutors at the Department of Justice determined that using Liberty Dollars as circulating money is a federal crime.

The Liberty Dollar was introduced by NORFED as a “private voluntary barter currency,” with the medallions exchanged for goods and services with merchants willing to accept them according to the stated face value on each.

? Are the pieces legal to own, sell, distribute or even exhibit for educational purposes at a coin show or other venue?

? Will federal law enforcement authorities seek to seize any of the tens of thousands of Liberty Dollars still in private hands?

Liberty Dollars were issued in multiple sizes and stated face values, with the silver 1-ounce pieces being the most popular used in exchanges. Face values changed over the years as the price of silver rose.

The medals proved popular with collectors.

With von NotHaus’ March, 18, 2011, conviction, values for Liberty Dollars were driven higher still. The number of eBay sales for such pieces also rose subsequent to the court case.

The seizure by federal authorities in November 2007 of millions of the Liberty Dollars held in a third-party warehouse in Idaho effectively shut down von NotHaus’ Liberty Services.

NORFED had been dissolved in December 2006, and resurrected as Liberty Services, doing business as Liberty Dollar. ¦