Letters from forgers to Bank of England now open to view 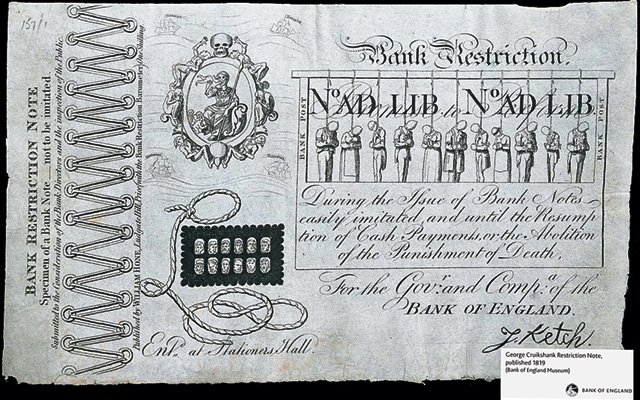 This satirical note was designed by 17th century cartoonist George Cruikshank in protest to the rising number of forgers who were sentenced to death. Standard features of the Bank of England notes are replaced by gruesome ornaments such as skulls, a hangman’s noose, ships for transportation to British colonial prisons in Australia, and Britannia gobbling infants.

Officials at the Bank of England Archive recently began making available to the public such prison correspondence from between 1781 and 1840.

From 1697 until 1832, the act of forgery or even the use of forged notes was punishable by death. However, with the rise in hangings, the bank began to offer the convicted the option of a “plea bargain” in the form of a guilty plea by a prisoner, who was then sentenced to 14 years “transportation,” meaning the prisoner would be exiled to British colony prisons in Australia.

Many of these letters were written by or on behalf of the prisoners to the bank’s attorneys, Freshfields, and are archived as Freshfields Prison Correspondence.

According to the bank, an epidemic of forged Bank of England notes occurred in the late 18th and early 19th centuries.

The surge was a consequence of the Napoleonic Wars of the 18th century, which had led to the Restriction Period, a time when the bank was no longer able to pay out gold in exchange for bank notes. The result was the issuance of low-denomination, £1 and £2 notes in 1797, with many forgeries to follow.

Many of the letters are pleas for help and charity written by women prisoners with children who were born in prison. These women often had no friends or had been abandoned by their husbands.

In response, bank officials on many occasions responded with charity to mothers and their children.

One such example is a letter sent by Mary Kelly dated Feb. 22, 1820, in which she describes her distress at having no friends to ask for help, states that her mother is extremely poor, and that she is also attending to a sick child. She was awarded 5 shillings per week on March 1, 1820.

One of the most vivid reminders of the era is a satirical note designed by 17th century cartoonist George Cruikshank in protest to the rising number of forgers who were sentenced to death.

The design elements on the satirical note includes skulls, a hangman’s noose, ships for exile to British colonial prisons in Australia, and a vignette of Britannia gobbling infants.

The note is signed J. Ketch. This was a byword for the hangman. The original Jack Ketch was a 17th century executioner who had a notoriously bad aim with his axe.

To learn more about the archives or to view the letters, visit the Bank of England website.