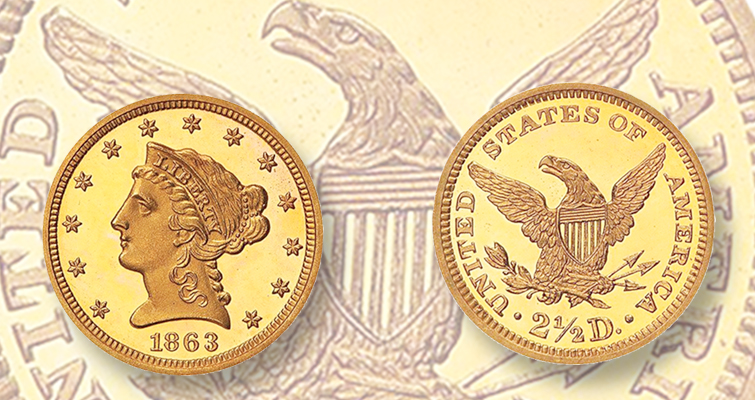 One of the top-graded 1863 Coronet $2.50 quarter eagles graded Proof 65+ Deep Cameo with a green CAC sticker is a star of the “BigMo Civil War Collection Part II” at Legend’s Regency Auction 42 on Dec. 3. 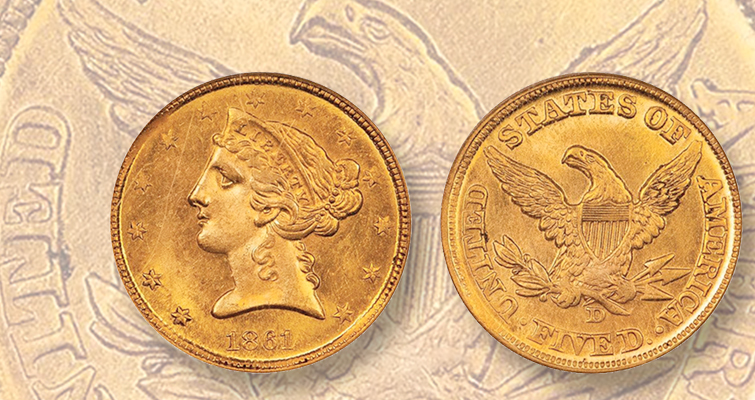 Graded MS-63 by PCGS and carrying a green CAC sticker, Legend suggests this 1861-D Coronet $5 half eagle could be the finest-known example of this rare Dahlonega Mint issue. 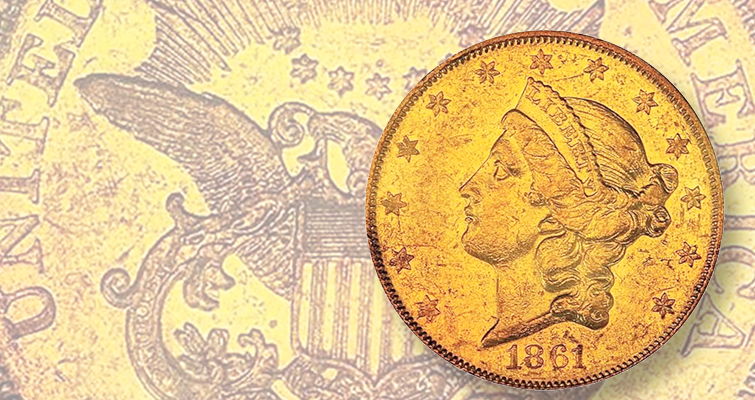 The 1861-O Coronet $20 double eagle is a well-known issue in the series that was struck under three different authorities. This AU-55 representative is one of the finer survivors known from the original mintage of 17,741.

Legend Rare Coin Auctions will continue its offering of Civil War era U.S. gold as it presents 31 coins from the second and final portion of the “BigMo” Collection at its Regency Auction 42.

The auction is scheduled to take place in Las Vegas on Dec. 3 as part of the Professional Coin Grading Service Members Only show. The first part of the collection was offered at Legend’s Regency 39 sale in July.

A top lot is an 1863 Coronet $2.50 quarter eagle graded PCGS Proof 65+ Deep Cameo with a green Certified Acceptance Corp. sticker, which is estimated at $230,000 to $250,000. Just 30 Proof strikes were produced, with no circulation strikes known. John Dannreuther’s recent book on Proof gold coins lists the offered quarter eagle as a top survivor of 20 listed examples, of which several are in museum collections including the National Numismatic Cabinet at the Smithsonian Institution, which contains two.

Legend writes, “Boasting essentially perfect surfaces, the GEM quality fields and devices are totally devoid of any marks, hairlines, lint marks, or distractions of any kind that would mar the outstanding eye appeal,” adding, “Amazing rich orange color radiates all over, with a thick frost on the devices, imparting a dramatic contrast between the devices and the fields.”

The issue is listed as number 96 in Jeff Garrett and Ron Guth’s 2019 edition of the 100 Greatest U.S. Coins. The authors note that it ranks in the top-tier of quarter eagle rarities. Legend adds that the consignor purchased it from dealer and PCGS co-founder David Hall for $225,000, calling it “a real trophy coin for the advanced U.S. gold coin collector.”

One of the consignor’s favorite coins in the collection is an 1861-O Coronet $20 double eagle graded About Uncirculated 55 by PCGS. The issue was the final double eagle struck at the New Orleans Mint until 1879.

As dealer and researcher Doug Winter has published, “It is historically significant due to the fact that it was struck under three different authorities: the Union, the State of Louisiana, and the Confederacy.” Winter believes that the facility under Union control struck 5,000 pieces from Jan. 1 to 26; the Mint under the control of the state of Louisiana struck 9,750 pieces from Jan. 26 to May 31; and the facility under the control of the Confederate States of America struck 2,991 coins after June 1, 1861. The entire mintage totaled 17,741 coins, and researchers debate how to attribute which 1861-O Coronet double eagles were struck by whom.

Winter explains, “This is one of the more difficult Type One double eagles to find with good eye appeal. Most are softly struck, unoriginal and heavily marked. Pieces with above-average eye appeal are very rare and in strong demand.” He adds, “Virtually all known 1861-O double eagles show deep, extensive marks on the obverse and reverse. This date appears to have seen extensive and rough circulation with many survivors showing signs of having been mishandled with rim bruises, scratches, and scrapes on the surfaces.”

Such abrasions are seen on the “BigMo” example. Legend observes, “While the surfaces show some abrasions and shallow marks, these are not singularly distracting and account for the grade, rather than actual wear,” before suggesting that the remaining reflectivity in the protected areas indicates that it was once fully prooflike.

Another noteworthy offering is what is possibly the finest-known 1861-D Coronet $5 half eagle of the 1,597 produced at the Dahlonega Mint under both Union and Confederate control. Winter calls the issue “the rarest and most numismatically interesting half eagle struck at the Dahlonega Mint,” noting that it is extremely rare in Mint State grades.

The PCGS MS-63 example in the auction is one of several recorded in this grade on the PCGS Population Report. It carries a green CAC sticker.

Legend’s catalog states, “The luster shimmers through a rich, warm, orange-gold color.” The firm recognizes that “a few ancient lines and contact [marks] account for the assigned grade.” 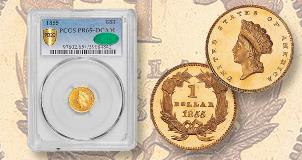 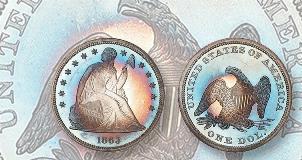 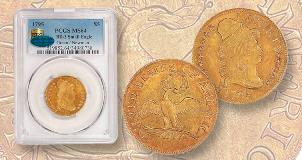