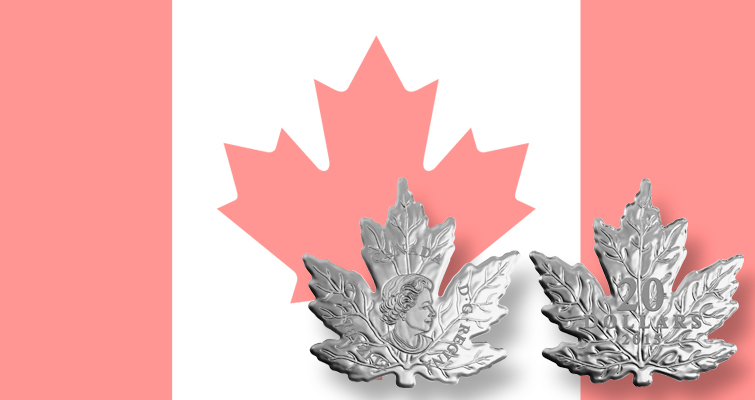 Canada’s maple leaf often appears on coins, but this is the RCM’s first coin shaped like a maple leaf, a 2015 silver $20 coin just issued.

The Royal Canadian Mint has issued many Maple Leaf coins with all manner of embellishments — gold plating, holograms, and color, to name a few.

But a new commemorative $20 coin could shape a different future for Canadian coins.

On Aug. 4, the RCM issued a Proof .9999 fine silver coin shaped like a maple leaf, the first such special shaped coin from the RCM.

The dies used for this coin necessitated an exacting minting process, including the use of specialized equipment to shape the dies, according to the RCM.

The reverse design by RCM engraver Marcos Hallam recreates the familiar elements of a maple leaf — specifically a leaf of the silver maple (Acer saccharinum) species.

“Here, the coin’s unique shape accentuates the palmate leaf’s serrated edges,” the RCM said in a press release. “An intricate series of deep veins are rendered with finely detailed engraving, as they run through each of the leaf’s five pointed, tapering lobes. Different finishes bring added dimension to the design, enhancing the engraving and lending the leaf a bright natural appearance.”

The coin measures 38 millimeters in diameter (tip to tip) and weighs 31.15 grams.

It has a mintage limit of 15,000 pieces and retails for $149.95 Canadian. The actual price in U.S. funds will vary based on the exchange rate at time of purchase.