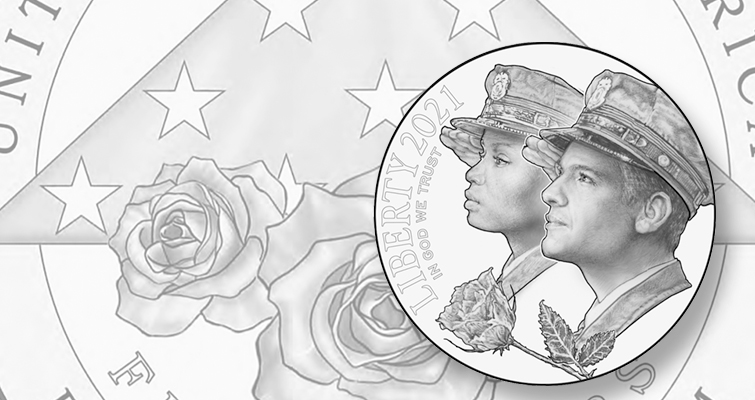 The obverse design recommended by the CCAC for the 2021 National law Enforcement Museum gold $5 coin was originally submitted for consideration for the silver dollar. 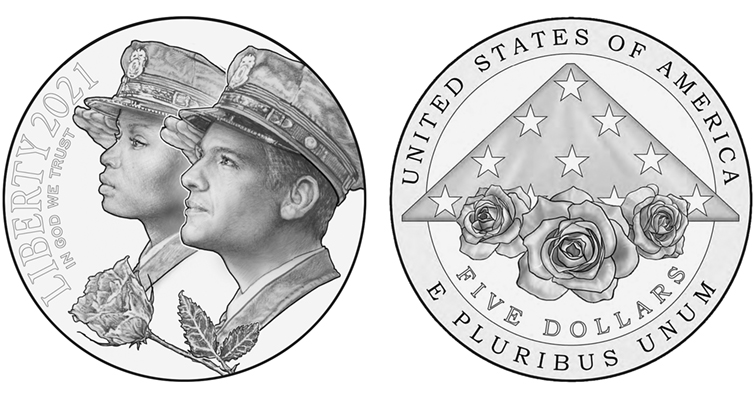 The CCAC recommends these designs for the gold $5 coin. 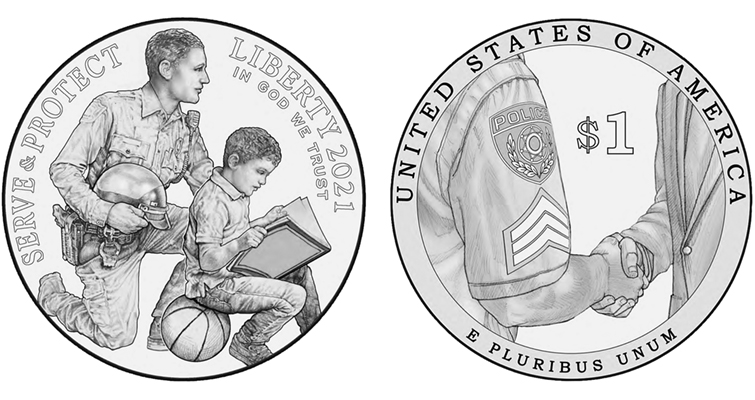 The CCAC recommends these two designs for the silver dollar. 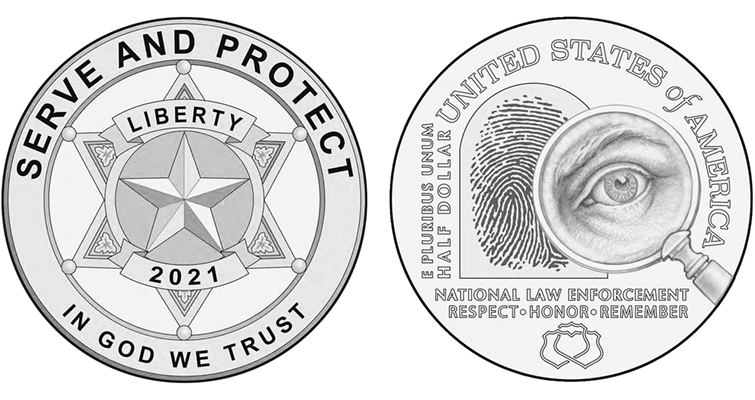 Proposed designs for the copper-nickel clad half dollar were recommended Sept. 23 by the CCAC.

For the obverse of the $5 coin, the CCAC recommends a design originally submitted as an obverse for the silver dollar. The proposed design depicts a male officer and a female officer saluting.

The design incorporates a rose, representing a respectful tribute to those who served and sacrificed. However, CCAC members recommends that the rose be removed from the design.

The recommended reverse design depicts a folded American flag with three roses symbolizing remembrance beneath it.

For the program’s dollar coin, the CCAC-recommended obverse design features a police officer kneeling next to a child who is reading a book and is sitting on a basketball, symbolizing service to the community and future generations. The additional inscription is SERVE & PROTECT.

For the half dollar, the CCAC recommends an obverse design depicting a child’s tin-plate sheriff’s star, representing the community served by law enforcement officers and the important role they play. The six-pointed star badge bears a five-pointed star at center with LIBERTY inscribed on a ribbon at the top of the badge and the date 2021 on a ribbon on the bottom of the badge. SERVE AND PROTECT is inscribed along the top border with IN GOD WE TRUST along the bottom border.

The half dollar reverse design recommended by the CCAC “depicts an eye in a magnifying glass looking at a fingerprint, portraying the human side of justice and a reminder that law enforcement is not just officers on the street, but many other people working behind the scenes,” according to U.S. Mint narrative. “The design also features the emblem of the National Law Enforcement Museum.”

The CCAC’s recommendations along with those of the Commission of Fine Arts and input from the Mint will be forwarded to Treasury Secretary Steven Mnuchin or his designate for final approval.

The enabling legislation calls for the maximum production and release in Proof and Uncirculated versions of up to 50,000 $5 coins, 400,000 dollars and 750,000 half dollars. 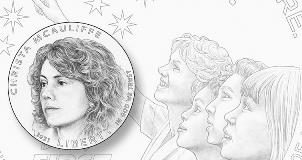 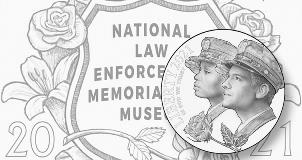