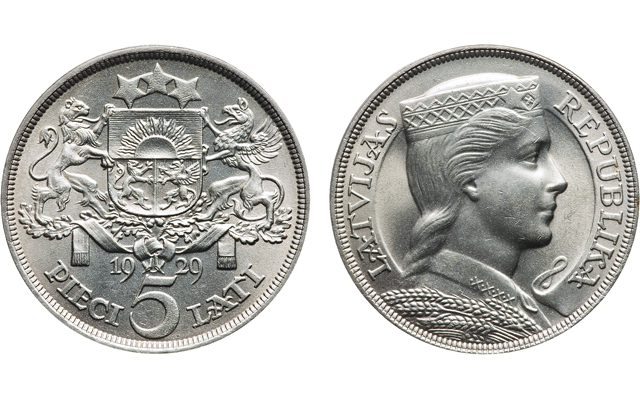 The silver 5-lats coin of 1929 to 1932 may be the most popular Latvian coin of all time. The coin depicts the young nation’s coat of arms on the obverse and a traditional folk maiden on the reverse. 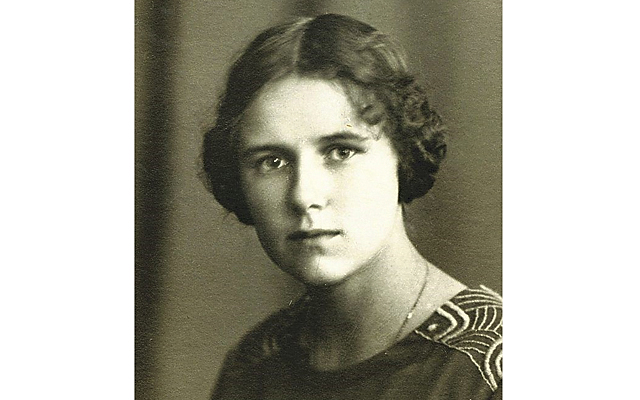 A young proofreader at the State Securities Printing House, Zelma Brauere, was the inspiration for the artist who created the design of the crown-sized silver coin. 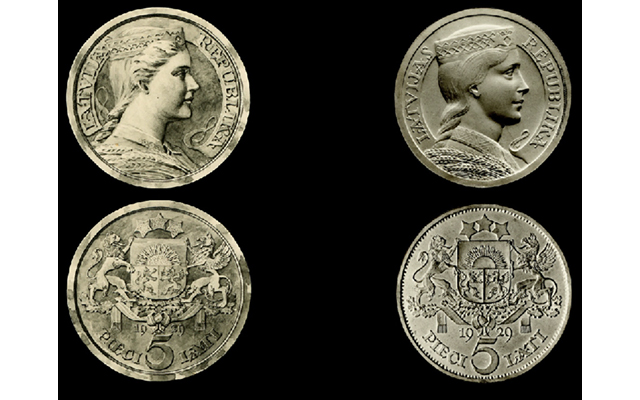 Rihards Zarinš’ drawing of the original 5-lats coin appears at the left, next to images of the plaster models of the 5-lats coin by British Royal Mint engraver Percy Metcalfe. Zarinš was a designer of notes and stamps in czarist Russia.

Editor’s note: The following is the first of a three-part Coin World series about Latvia’s folk maiden as she appears on coins, prepared by Jeff Starck for the July 2014 monthly edition of Coin World.

The folk maiden design, also known as “Milda” by some, is rooted in the first series of coins Latvia issued after gaining independence following World War I.

The “noble maiden” with the traditional headdress and ears of corn is a “shared relic” of Latvia’s history, according to academician Janis Stradinš, who was a member of the Coin Design Committee of the Bank of Latvia in 2012 when the silver 5-lats coin was issued with the design.

The lats and santim currency system (where 100 santims equaled 1 lat) was adopted in 1922, but the now-iconic folk maiden did not debut until 1929, when the Ministry of Finance declared that a design symbolizing the Republic of Latvia and freedom would be used for the 5-lats coin. The Royal Mint in London was commissioned to strike the coin.

Though Karlis Zemdega won a design contest announced by the Academy of Arts, his sketch was not used because it did not represent a “distinctive Latvian character,” according to Stradinš.

Instead, the bank called upon Rihards Zarinš, a successful designer of bank notes and stamps in czarist Russia who had returned to Latvia in 1919 after independence, to create the design. After his return, Zarinš became one of the designers of the coat of arms of the Republic of Latvia (which was drafted by graphic artist Vilis Kruminš) and also designed many early Latvian bank notes.

Zarinš was also manager of the State Securities Printing House on Pushkin Street in Riga, a fact that may have secured the contract for the coin design, notes Stradinš.

Zarinš chose Zelma Brauere, a proofreader at the printing house whose youth, beauty and gentle demeanor fascinated the artist, as his model for the folk maiden. At that time, she was 29, a university graduate in philology, and diligent, intelligent and very honest, according to Stradinš.

Zarinš, more than 30 years her senior, chose her as a model for many of his graphic works. He also had feelings for the young woman, as evident from some letters, but their relationship seems to have remained platonic, Stradinš said.

Zarinš used Brauere’s portrait for two of the bank notes he designed, and as a traditional costume model in a book that he published, so the artist and his subject were familiar when she posed to become the icon of Latvian freedom at the dawn of Latvian statehood.

The obverse of the 5-lats coin shows the coat of arms of the Republic of Latvia with the year of issue below the design, all surrounded by the inscriptions PIECI (Latvian for five), the number 5 and denomination LATI.

To emphasis her “ethical purity” and her representation of a work ethic most powerfully, the artist opted for few details: “ears of corn overlaying the folk-maid’s shoulder, a rich braid stretching down her back, and her collar and head dress embroidered with an ornamental design characteristic of Latvian folk costume,” according to the Bank of Latvia.

An inscription with the Latvian Republic name appears on the reverse.

The edge of the coin is lettered with the phrase DIEVS SVETI LATVIJU, which translates to “God Bless Latvia.”

When the coin was released Dec. 23, 1929, residents formed long lines at the bank to obtain it. In 1929, Latvia was experiencing an economic crisis but also a “devaluation of values,” according to the Royal Mint, which wrote about the coin in 2012. “The people desired something noble and beautiful,” and the design on the coin was widely accepted as a sentimental embodiment of those qualities, according to the Royal Mint.

The coin was nicknamed “Milda” and became as popular as the sculpture at the top of the Freedom Monument, which is also known by that nickname.

In total, 3.6 million of the coins were minted in the three years in which the coin was struck. The 5-lats silver coin was used for gift giving such as at weddings or christenings and the coins were kept as keepsakes of the nation and as a store of value.

During World War II when Germany occupied the nation and Latvia lost its independence and national currency, the silver 5-lats coin became a symbol of freedom and statehood for the nation, “a comforting ray of hope for those scattered in Siberia and in exile across the globe,” according to the bank. Examples of the coin were secretly stored by almost every Latvian family as a reminder of their national identity, the bank said.

The coin survived in other forms as well. Transformed into brooches and pendants, the coin became a quiet but obvious symbol in defiance of the Soviet occupiers after the end of the war, a symbol of Latvians’ belief that they would regain their independence.