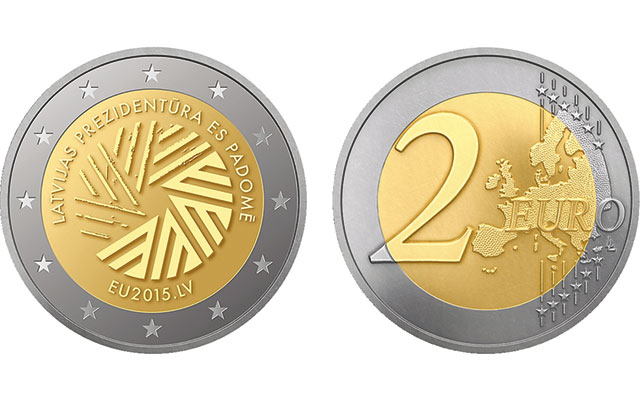 Latvia’s central bank has issued a 2015 circulating commemorative €2 coin to commemorate Latvia’s turn in the presidency of the Council of the European Union.

The coin was unveiled Feb. 9 and began circulating Feb. 10.

The presidency has two main tasks, planning and chairing meetings in the Council and its preparatory bodies and representing the Council in relations with the other EU institutions

The obverse was designed by Gunars Lusis and modeled by Janis Strupulis.

The common reverse, showing a map of the European Union, was designed by Luc Luycx.

Latvia’s commemorative €2 coin has the same standard specifications as all regular, ringed-bimetallic €2 coins, weighing 8.5 grams and measuring 25.75 millimeters in diameter.

The coin has a copper-nickel ring and a nickel-brass/nickel/nickel-brass layered core.

Latvia had the coins struck by the Staatliche Münzen Baden-Württemberg in Germany.

The coin has a mintage of two million pieces.