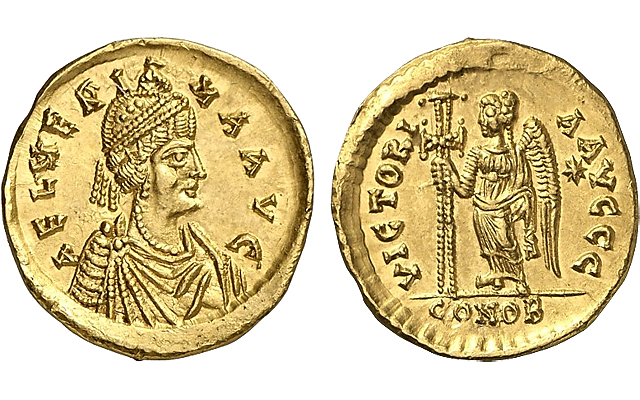 Verina — most probably a Germanic woman of unknown origin — married Byzantine emperor Leo long before he rose from officer to emperor in 457. Their daughter Ariadne was eventually married to Emperor Zeno.

When Leo died of dysentery in 474, his survivors included two young heirs and a power vacuum that Verina tried to fill. Together with her lover Patricius, her brother Basiliscus, the Isaurian General Illus, and General Theoderich, Verina conspired against Zeno and forced him to flee Constantinople in 475. He returned to power in 476, and Verina continued to plot against him.

Verina was one of several conspirators thrown in jail with Zeno’s consent, which spurred an unsuccessful uprising from her son-in-law, Marcian, a grandson of the emperor.

Verina fought to retain influence for more than 10 years and in various alliances before she died during the siege of Antiocheia by Zeno in 484.

The sale results suggest that, “Classical beauty is en vogue,” according to the firm. “[Strong] prices are being paid for the great artistic works even when their grading isn’t [Uncirculated].”

The Roman coin was among thousands of offerings over three days.

Auction No. 219 offered “high quality ancient coins”; auction No. 220 featured ancient coins and lots. The final auction, No. 221, focused on coins of medieval and modern times. A full list of prices realized can be viewed at the firm’s website, www.gmcoinart.de/online_katalog.