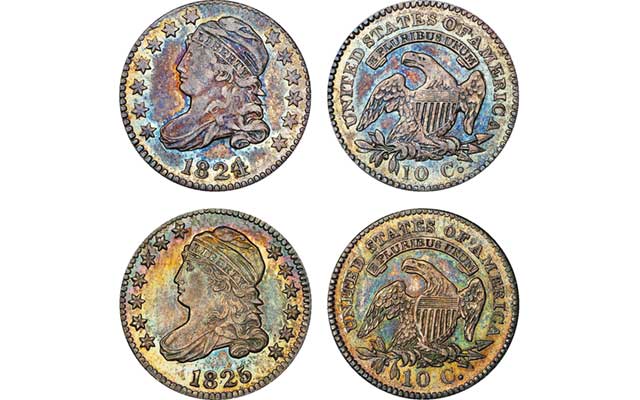 W. David Perkins will be offering for sale the Kirk Gorman Reference Collection of Capped Bust Dimes 1809-1837 beginning at the January 2016 FUN Convention in Tampa, Florida.

As in the early half dime and other sales Perkins has conducted in the past, the dimes will be sold in a combination sealed bid auction and fixed price list sale or sales at the January FUN and Summer ANA conventions.

Gorman has collected and researched the Capped Bust Dimes for nearly two decades. The Gorman Collection has 122 of the 123 known die marriages, missing only the 1827 JR-14, an R-8 marriage. According to the 2013 John Reich Collectors Society (JRCS) Capped Bust Dime Census, the average grade of the collection is “Almost Uncirculated-51,” the second highest average grade in the Census. In total, 130 Capped Bust dimes are consigned to the sale.

Some dimes in the sale are pedigreed to Louis E. Eliasberg, Subjack, Lovejoy, and others.

Approximately two thirds of the dimes in this old time collection were “raw” when Perkins received them, and the other one third were in PCGS and NGC holders. All 130 coins were sent to PCGS this week for PCGS Trueview photography outside of the holders, grading, attribution and crossing into new PCGS holders with the Gorman name on the labels. A number of the Capped Bust Dime die marriage photos are currently missing in PCGS Coin Facts – the Gorman collection importantly should fill in all but one of the missing photos.

It is unlikely any of the Gorman dimes will be back from PCGS in time for viewing at the 2015 ANA Convention in Chicago. However, photographs for most of the collection should be available shortly after the ANA Show in Chicago.

If you would like to be included in Perkins' Capped Bust Dime Collector and Dealer Distribution List for this sale as well as future offerings, please send a note to Dave at wdperki@attglobal.net with your name and email address and you will be added to the list.  You can also see Perkins at the ANA Convention in August in Chicago at Tables 617 and 619 (listed under W. David Perkins, Numismatist).

Those on this distribution list will receive information and the sale catalogs for this and other early dime sales in the future.

Please feel free to contact Perkins if you have questions. He can be reached via email at wperki@attglobal.net, or you can see him at the ANA Convention in Chicago at Tables 617 and 619.