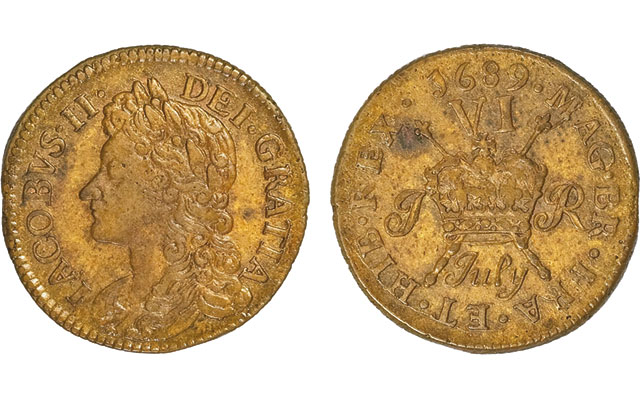 When King James II was deposed from the throne in Britain, he fled to Ireland, where an emergency issue of “Irish gun money” was issued. These coins bear the month of issue, July of 1689 on this piece, as he was going to redeem them in order of issuance upon his return to the throne, which never occurred. 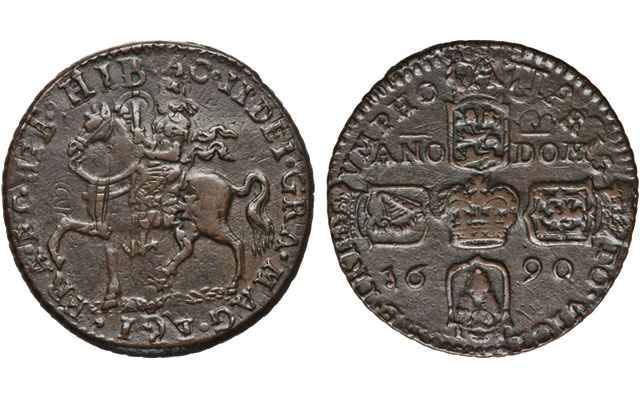 A 1690 issuance of Irish gun money added the crown denomination, seen here, which was struck on earlier half crowns.

Editor's note: The following is the third of a five-part Coin World series about collecting emergency coinage, prepared by Jeff Starck for the March 2015 monthly edition of Coin World.

When King James II of England was deposed in 1688 for his papist tendencies and support of Parliament, he first fled to France before landing in Ireland in March 1689. From there James II operated a campaign to oust his successors, William III of Orange and Mary, and return to the throne.

Though mints were operating in Dublin and Limerick, precious metals were in short supply (merchants had sent much of their precious metal to England for safekeeping), so James II and his supporters became inventive. They recycled old cannons, bells and kitchen utensils to create the Irish coinage known as gun money today.

In June 1689, James ordered a new base currency: half crowns, shillings and sixpence to be made of brass or other copper alloy. At first these were not legal tender for important debts such as mortgages, bills and bonds, but by the following February James proclaimed them good for all debts.

The coins were struck bearing inscriptions of the month and year of manufacture, apparently because James II intended to redeem gun money with silver coins after he had won back his crown.

In 1690, James even recycled some of his 1689 coinage, striking crowns (a new denomination) over old half crowns.

Gun money continued to be issued into July 1690, when William III’s forces captured the Dublin Mint, and for another couple of months at the Limerick Mint.

A series of halfpennies and farthings, most struck over gun money, were made in Limerick in 1691 and are often included in the discussion of Irish gun money.

After William III’s forces prevailed, Irish gun money pieces were allowed to be converted, but at intentionally low values, to English money.

No accurate mintage figure for Irish gun money is known, but many pieces survive, although in varied condition.

As this story was being written, a dealer at Ma-Shops.com was offering a January 1689 sixpence in Extremely Fine condition for €204 (about $229 U.S.).

Nicer than average examples, scarcer pieces and Proof versions sell for much more. Before buying these coins, a collector would do well to study the options.