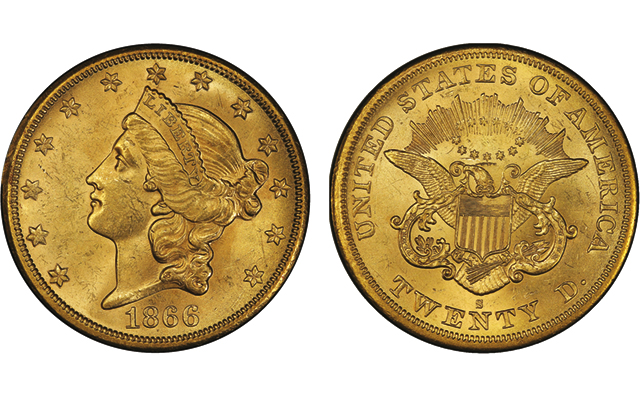 The most valuable coin from the Saddle Ridge hoard — the PCGS MS-62 1866-S Coronet, No Motto, double eagle — remains to be sold.

Images by PCGS, courtesy of Kagin’s.

A 14-coin lot of the top coins from the Saddle Ridge hoard of United States gold coins has been broken up for individual coin sales. Two coins from the lot have already been reported sold, for undisclosed prices.

The lot was originally offered by Kagin’s through Amazon.com beginning May 27 for $2.75 million. Although the entire lot attracted some interest, more interest was shown in specific coins in the lot, according to David McCarthy, senior numismatist and researcher for Kagin’s in Tiburon, Calif.

McCarthy examined, curated and priced the coins from the hoard that are being offered separately through Kagin’s and Amazon.com. Anyone seeking to purchase a coin illustrated on the Kagins.com website must telephone the firm at 888-852-4467 to complete a purchase. Purchases of Saddle Ridge hoard coins offered on Amazon.com can be executed directly on the site.

The prices the two coins brought were not disclosed, at the request of the northern California couple that discovered the gold coin hoard in February 2013, secreted within eight metal cans on their property. For the remaining 12 individual coins from the large lot, McCarthy said he was discussing pricing with the couple and how the coins will be offered.

The other 10 coins, all graded by PCGS, are:

The coins found ranged in date from 1847 through 1894, with most of the coins struck at the San Francisco Mint with the S Mint mark. Other Mints represented were Carson City, Philadelphia and Dahlonega.

The first coin sold from the hoard was an 1874-S Coronet gold $20 double eagle, graded About Uncirculated 53 by PCGS, that the couple who discovered the hoard donated to the San Francisco Museum and Historical Society to auction to raise money for renovating the second San Francisco Mint.

McCarthy said roughly 75 percent of the coins, combined, offered by Kagins.com and Amazon.com, are sold.

An undisclosed number of coins from both venues were purchased but returned by the buyers, and in turn have been resold to new buyers, McCarthy said.

Most of the coins remaining are in the Extremely Fine to About Uncirculated grades, although some coins being offered are in the lower Mint State grades, McCarthy.

McCarthy said the legalities of opening the Amazon.com sales to customers outside the United States are being explored.¦