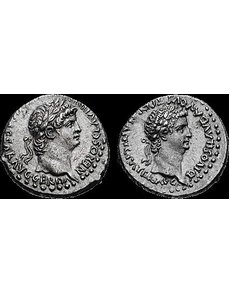 Nero portrays himself and his deceased stepfather, Claudius, on this didrachm of Caesarea. Claudius is shown as deified, an honor he received after he was murdered by Nero’s mother. 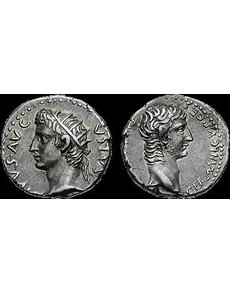 Two deceased Julio-Claudians are portrayed on this silver denarius of Caesarea: Rome’s first emperor Augustus (27 B.C. to A.D. 14) and a would-be heir, Germanicus, who was murdered in A.D. 19. 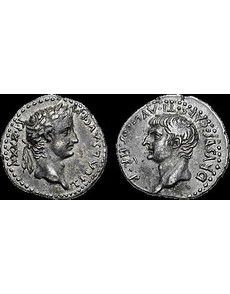 This silver drachm of Caesarea depicts the Emperor Tiberius (A.D. 14 to 37) and his son, Drusus, who was murdered in A.D. 23 while heir to the throne.All images courtesy of Classical Numismatic Group. 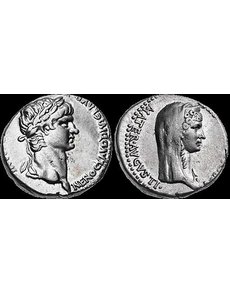 A Caesarean didrachm of the Emperor Nero (A.D. 54 to 68) bears his portrait and that of his mother, Agrippina. It was struck early in his reign, before he arranged her murder.

Hundreds of ancient mints in the Mediterranean world struck coins with the permission of the Roman emperors.

These coins, usually called “Roman provincials” or “Greek Imperials,” are avidly collected for their historical value, design types and oftentimes their charming style.

One of the most important provincial mints was Caesarea, located in Cappadocia, a lofty plateau in the center of modern-day Turkey. Coinage under the Roman emperors commenced there after A.D. 17, when its last king died and Cappadocia became a province.

Caesarea was one of the few provincial mints consistently allowed to issue silver coins — a privilege usually reserved for the imperial mints. Though Caesarea issued silver coins with the portraits of emperors for more than two centuries, in terms of variety and interest of types, its numismatic heyday was from A.D. 33 to 68, under the Julio-Claudian emperors.

Some of them have attractive, historical reverse types celebrating Claudius’ invasion of Britain, the appointment of a new ruler in Armenia under Tiberius or a military campaign in Armenia during the reign of Nero. Others portray relatives of the emperors, including potential heirs and empresses. Though the coins of the emperors are worthy of a column all their own, we’ll focus on coins depicting their relatives.

No coins honoring Rome’s first emperor, Augustus, were struck at Caesarea during his lifetime, for the region was ruled on his behalf by a client king, Archelaus (36 B.C. to A.D. 17). However, after Augustus’ death and deification in A.D. 14, his portrait appears on a drachm that also portrays his adopted son Germanicus.

These coins are now usually attributed to the reign of Tiberius, the successor of Augustus, who sponsored Germanicus as his first heir to the throne. It is also possible they were struck later, under the Emperor Caligula, who was Germanicus’ only surviving son.

This nobleman, the brother of the emperor Tiberius, died from an accident 23 years before his brother ascended the throne. Nero Claudius Drusus is honored by his son, Claudius, who was only a newborn when his father died.

Nero Claudius Drusus is portrayed on the obverse of didrachms that show a triumphal arch dedicated to his victories in Germany. Though Claudius struck numerous other coins honoring his long-deceased father, this issue of Caesarea certainly is one of the rarest and most beautiful.

Perhaps the most promising of the Julio-Claudian heirs, Germanicus was cut down in his prime. He was beloved to Augustus, Rome’s first emperor, who would have named him his successor had he been more experienced when Augustus neared the end of his life.

Instead, the throne passed to Germanicus’ uncle, Tiberius, who made Germanicus his first heir. The two men often clashed, and many believed Tiberius was responsible for Germanicus’ murder in A.D. 19 while the heir-apparent was in the East on a diplomatic mission.

Germanicus is portrayed on the Cappadocian drachms (already described) that also portray the deified Augustus. His bust also occurs on didrachms and drachms with a reverse type celebrating the appointment of a king to the throne of Armenia in A.D. 18. Scholars are not sure whether these coins were struck under Tiberius, Caligula or Claudius.

After the death of Germanicus, the succession passed to Drusus, the only son of the Emperor Tiberius. Unfortunately for Drusus, a craftier and more ruthless man, his father’s praetorian prefect Sejanus, had designs on the throne. Sejanus was single-minded in eliminating rivals in the Julio-Claudian family (including Drusus); though it cleared his path, he ultimately failed himself.

The drachms portraying Tiberius and Drusus are memorial coins that Tiberius struck in A.D. 33 a decade after his son’s murder. They are interesting and historical coins, especially since no other precious metal issues are known for Drusus.

The Emperor Claudius was unlucky in his relationships with women. He was married four times, with all of them being terrible failures. His third wife, Messalina, was 14 when they married, and apparently was violent, vengeful and promiscuous. In A.D. 48, while Claudius was away from Rome, Messalina unwisely married a young nobleman and paid the ultimate price when Claudius returned and her new, unlawful husband was executed and she was driven to commit suicide.

Her veiled portrait appears on one silver coin of Caesarea: a rare and artistic didrachm that shows on its reverse the standing figures of Claudius’ three surviving children, two of whom were her own.

The Emperor Claudius also struck a number of silver coins that portrayed his next (and last) wife, Agrippina. She was a particularly bad choice: not only was she his niece, but if the historical record is true, after five years of marriage she served Claudius a dish of poison mushrooms that caused his death.

Claudius was succeeded by Agrippina’s son, Nero, who was destined to be the last Julio-Claudian emperor. Since Nero’s only true qualification as emperor was his pedigree, he extensively honored Agrippina and Claudius on coins, including silver drachms and didrachms of Caesarea. Often on these coins, Claudius is shown as a god, and Agrippina wears a veil. ¦