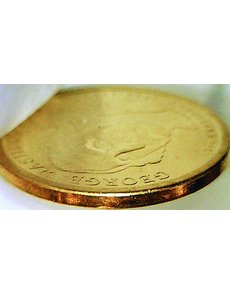 The 2007 George Washington Presidential dollar missing its edge inscription is of the type a former Philadelphia Mint police officer admitted stealing from the coin production facility.

Former Philadelphia Mint police officer William Gray was sentenced to a term in federal prison Sept. 13 on charges related to the theft of error coins from the Mint facility.

The sentencing occurred a year after Gray admitted he stole thousands of Presidential dollars lacking the edge inscription from the Philadelphia Mint and sold them to a California coin dealer for approximately $2.4 million.

The former Philadelphia Mint police officer was sentenced by U.S. District Court Judge Noel L. Hillman in Camden, N.J., to 36 months in a federal penitentiary. Gray, aged 65, is from North Wildwood, N.J. Judge Hillman also sentenced Gray to three years of supervised release after serving the prison term, and ordered Gray to pay $15,208 in restitution to the U.S. Mint, forfeit property that is traceable to having been associated with the sale of the stolen coins, and cooperate with the IRS concerning his tax liability for underreporting his earnings.

The property to be forfeited includes $2.3 million in cash, two houses in Philadelphia, five motor vehicles, a boat and boat motor.

Gray admitted depositing the proceeds from the sale of the stolen coins into his Police and Fire Federal Credit Union account.

Gray pleaded guilty to one count each of theft of government property, tax evasion, mail fraud and money laundering.

Gray admitted before Judge Hillman that the thefts began in 2007, the year the Presidential $1 Coin Program was introduced.

Gray removed the coins before the edge inscription was added, which occurs in a separate production step after the coins are struck with a plain edge.

Theft and sale of coins

Matthew Reilly, acting public affairs officer for the U.S. Attorney’s Office in Newark, told Coin World on Sept. 25 that the U.S. Mint estimates that Gray stole from 10,108 to 12,208 Presidential dollars of different designs that were lacking the edge inscription.

Gray said he was initially paid $20 per coin, and eventually received from $70 to $75 per coin.

Gray admitted to shipping the coins to the coin dealer in California from the U.S. Postal Service facility in Rio Grande, N.J., and from the Federal Express facility in Egg Harbor Township, N.J.

Gray also admitted that between 2007 and 2009, he failed to report the sales of the stolen coins on his income tax return. Gray admitted understating his tax liability by $801,651.

According to Gray’s plea agreement filed Sept. 8, 2011, a public document that Coin World obtained, Gray identified the California coin firm to whom he sold the stolen error coins as Byers Numismatic Corp. The firm, owned by Michael S. Byers, is currently located in San Clemente, Calif.

Reilly said Sept. 25 that there is no evidence that Byers knew the Presidential dollars lacking edge lettering that Gray supplied to the firm were stolen. Reilly said the U.S. Attorney’s Office has no plans to pursue any charges against Byers.

Tom Jurkowsky, director of the U.S. Mint’s Office of Public Affairs, issued a statement to Coin World on Sept. 23, 2011, in response to a question concerning the legality of ownership of error coins depending on how they enter the marketplace.

“Error coins that are lawfully issued — coins that were not detected by humans or machines — belong to whomever has lawful possession of them,” according to the statement published in an
Oct. 10, 2011, Coin World article.

“The United States Mint strives to achieve only the highest quality of coins that it produces. However, we as humans — despite our high professional standards and use of exceptional machinery and equipment — occasionally make mistakes. While rare, coins containing errors have legally left our facilities. As long as such coins have been legally issued (e.g., numismatic coins sold to collectors who purchase numismatic products, or circulating coins sold to the Federal Reserve Banks), they may be privately owned. We do what we can to minimize those occurrences and pride ourselves on the very low number of error coins that do, in fact, find their way into circulation or into our numismatic products,” according to the Mint statement.

“What we cannot control, unfortunately, is human nature and a person’s willingness to abuse the trust and authority that is given to them. And what we cannot legally sanction is the private ownership or sale of the objects of such abuse — error pieces that were never legally issued and, as such, remain property belonging to the United States. When that abuse occurs, we will act appropriately.”

According to the article, “Based on Jurkowsky’s statement, it would seem that the coins stolen by the Mint police officer and sold into the marketplace remain Mint property and thus are not legal to own. However, it remains to be seen whether those coins can be distinguished from those Presidential dollars lacking edge inscriptions that were legitimately released. The future of the stolen coins may hinge on any continuing investigation into their theft and distribution into the marketplace.”

Reilly, the U.S. Attorney’s Office spokesman in Newark, indicated Sept. 25, 2012, that federal officials are not pursuing any additional investigation involving the stolen coins.