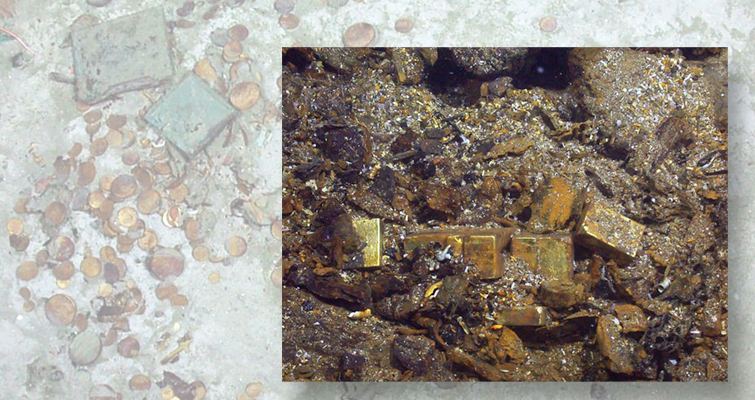 Gold bars, coins and personal effects from the SS Central America are seen scattered across the ocean floor before their recovery by Odyssey Marine Exploration.

The full fair market value of the treasure recovered in 2014 from the 1857 wreckage of the SS Central America has been awarded by a federal judge in Virginia to the salvor, Recovery Limited Partnership.

Disposition of the award will occur under the auspices of Kane as receiver, subject to the approval of Franklin County Common Pleas Court Judge Patrick Sheeran in Columbus, Ohio.

RLP contracted with Odyssey Marine Exploration in 2014 to conduct the archaeological excavation and recover the remaining valuable cargo from the SS Central America shipwreck, which is located approximately 160 miles off the coast of South Carolina and 7,200 feet underwater.

Under the direction of a project archaeologist (Neil Cunningham Dobson, with Bob Evans, well-known to the numismatic community, as the chief scientist), the Odyssey team deployed a remotely operated vehicle to recover and document more than 15,500 gold and silver coins, 45 gold bars, and hundreds of other artifacts from the SS Central America shipwreck site.

Operational reports and inventories of the items recovered during the 2014 expedition can be found on the Odyssey Marine website.

According to Odyssey Marine: “Prior to any recovery work, a photomosaic of the site was created by digitally stitching together over 12,500 high-resolution images of the site. The 2014 SS Central America expedition was conducted over 129 days and included 83 ROV dives recording over 2,000 hours of dive time. The longest dive lasted over 125 hours. A 161,000-square-meter, high-resolution video survey of the shipwreck and surrounding seabed was also completed. During recovery operations, the Odyssey Explorer carried 17 ship crew members and a technical crew of up to 18 individuals and two highly experienced members of the Receiver’s oversight team.”

The search for and recovery of the SS Central America’s treasure began more than 30 years ago.

In 1985, Thomas G. “Tommy” Thompson, an ocean engineer with the Battelle Memorial Institute in Columbus, Ohio, founded the Columbus-America Discovery Group. More than 160 investors, most from Columbus, provided Thompson with $10 million in funding.

Thompson proceeded to research and search for the Central America shipwreck.

Thompson and his treasure salvage team found the ship’s bell in 1986, some 8,500 feet below the surface of the Atlantic Ocean.

It would be another year before salvors for CADG, from the vessel RV Arctic Discoverer, located the shipwreck, in July 1987. Thompson spearheaded further salvage operations between 1988 and 1991, with large quantities of gold coins and bars and other items recovered.

The salvaged treasure from the SS Central America languished for years in warehouses in Virginia while attorneys for the salvors and the insurance underwriters from the 19th century or their successors battled for ownership rights.

Disposition of much of that treasure finally occurred early in 2000.

Thompson and his assistant, Alison Antekeier, both became fugitives in 2012 when Thompson failed to appear for various hearings for an ongoing civil case pending since 2006 involving the treasure wreck.

That suit focuses on Thompson’s alleged failure to reimburse investors who financed the 1980s salvage operations. Antekeier failed to appear to disclose why Thompson did not present himself in court.

Thompson and Antekeier were arrested in January 2015 in Florida by U.S. Marshals and subsequently extradited to Ohio.

VIDEO: Watch how Tommy Thompson's hometown is covering his arrest

Managing editor William T. Gibbs wrote about the history of wreck in 2014: 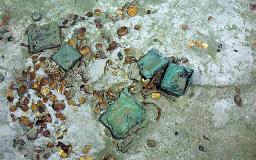