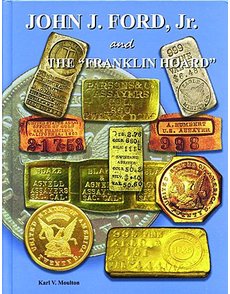 Karl V. Moulton’s new reference delves into the numismatic meanderings of John J. Ford Jr. and his involvement with the Franklin Hoard.

In my July 15 column, I discussed John J. Ford Jr. and his discoveries of hitherto unknown varieties of Western gold coins and ingots. John was viewed as America’s leading authority on counterfeits, alterations and forgeries, and was recognized as such by the American Numismatic Association, the Professional Numismatists Guild, and by many collectors and dealers.

Coming to the rescue of John was Dr. Donald Kagin, whose book, Private Gold Coins and Patterns of the United States, was published in 1981.

Many if not most of John’s new discoveries were included in the book. John said that Kagin had done extensive research, had unimpeachable credentials on the subject of Western numismatic Americana, and had independently verified the coins and ingots, thus settling the matter once and for all.

John made a special arrangement for my company to receive and offer for sale discounted copies of the book. He wanted it to be as widely distributed as possible. Finally, his name had been cleared by a third party.

However, upon study, for me many of the illustrations raised further questions. Pictured were items made by the U.S. Assay Office of Gold in San Francisco that were marked as .999 pure (999/1000ths).

How could that be, I wondered, when at the time, the assay office had problems refining gold to even .900 pure, the federal standard?

Some years ago, I began writing reminiscences of Ford as part of some autobiographical notes.

Karl Moulton, a researcher who became interested in the controversy, learned of this and wrote to me stating that he had acquired copies of many of John’s papers from the disposal of his estate, had done other studies, and was going to write a book.

He asked me to be a copy editor, and I agreed. Others contributed as well.

Now in print, John J. Ford, Jr., and the “Franklin Hoard” — containing extensive Ford correspondence, invoices and other material — reveals that Ford created many fabrications — saying one thing about the pedigree or origin of a newly discovered item to one buyer and something different to another buyer.

The John J. Ford Jr. delineated by Karl Moulton is not the John that I thought I knew.

I still like to think that John was very good to me over a long period of time. He helped me with much research in Colonials, early American coins, tokens and other specialties. And, without question, his New Netherlands catalogs were and are magnificent. Let me suggest that he was 90 percent good for the hobby and 10 percent negative and self-destructive.

Q. David Bowers is chairman emeritus of Stack’s Bowers Galleries
and numismatic
director of Whitman Publishing LLC.
He can be reached at his private email,